Wine County to Singita Boulders--back to the wild

Our stay at La Residence in Franschhoek was outstanding.  A great staff and wonderful rooms.  We arranged for dinner the first evening at Ruben's, a recommendation by nearly everyone with whom we spoke,and were not disappointed.  Dishes of note included Patti's duck--which she said was the best she ever had--and my medallions of kudo, which were the best and, yes, the first kudo medallions I'd tasted.  But terrific and paired with a sublime South African Cabernet.  I know that South African wines haven't really taken off in the U.S., but they claim that the best is kept for consumption in Africa and I can't argue.  The wines have been just fine all along.  And, yes, Linda agrees. 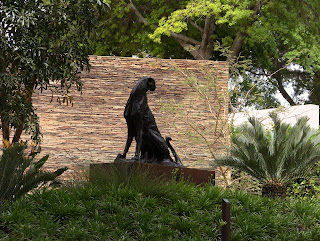 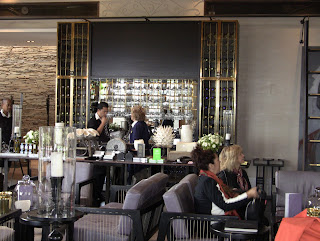 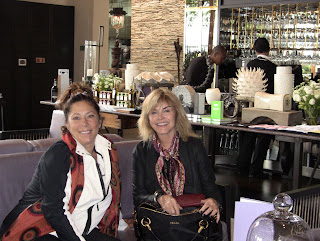 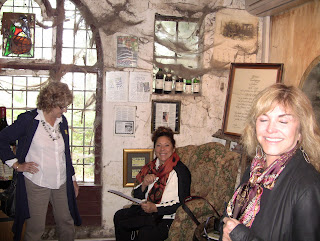 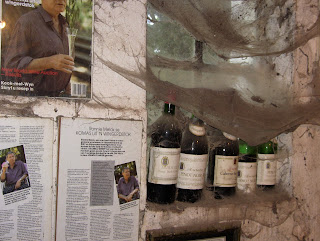 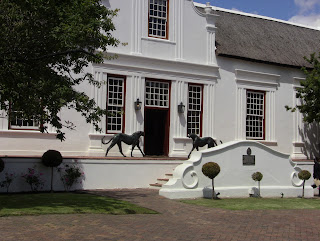 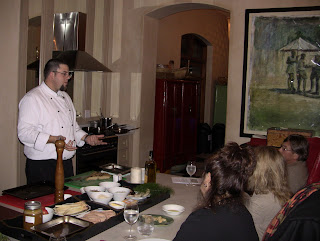 We visited three wineries the next day.  We began with a stop at Delaire, owned by Mr. Graff, as in Graff jewelry.  It was a winery as stunning as anything we've seen in France or Napa.  Mr. Graff poured seventy million dollars into the property, to update all of the facilities and acquire a first-rate collection of South African art.  The chardonnay was a find.

Our second stop was at Muratie, a winery over three hundred years old and known for its port.  The place reminded us of Praeger Portworks in Napa, right down to the intact cobwebs.  Two old German Shepard's plopped where they pleased and the atmosphere of Muratie was as comforting as strolling into an antique shop.  Most importantly, the port lived up to its billing.  They can ship into some U.S. states but, of course, not Ohio.

Our final stop, for lunch, was at Lanzarac, a five-star hotel with beautiful grounds and great wine.  Marc, by the way, played golf this day and claims to have done very well.

Before lunch, we strolled the town of Stellenbosch, the second oldest city in South Africa, bested only by Cape Town, the mother city.  Stellenbosch has some great sites, including one of the oldest residential structures in South Africa and the oldest residential street.  Now only an hour's drive from Cape Town, the trip took three days back when the city was founded.  Stellenbosch today is not only the center of the wine district, but home to an Afrikaans university and is an absolutely bustling community.  It reminded us of any of the tourist oriented towns in Napa, but our guide explained it had never been a tourism region until apartheid came to an end in '94.

We dined at the chef's table at La Residence on our last evening in the wine country and had a blast.  Charles, a young chef with a constant twinkle in his eye who clearly loves his craft, prepared a wonderful mushroom risotto, duck, and white asparagus.  Dessert was one of the most decadent chocolate mousse's we've ever tasted.

Our flight to Singita Boulders lodge the next day was fine, and our first day here was over the top.  The rooms are luxurious to say the least.  Outdoor plunge pools, a sprawling living area with two baths and an outside shower to boot, and a fully stocked bar.  To top it off, the wildlife viewing is incredible.  While we were being shown the dining area--a series of decks overlooking the Sand River--three Cape buffalo were embroiled in a fight and it was fairly dramatic.  Fortunately, I had the camera running and caught some great video.  We then learned that a leopard had killed an impala only yards from the camp that morning.  Marc soon learned from one of the waiters--guests were not supposed to know--that the leopard was enjoying his dinner behind cabin number one.  Linda and I are in number two.  Marc and I sneaked around to find the leopard and Marc cleverly positioned me between him and the beast.

It is one thing to see a leopard from the relative safety of a vehicle, and quite another to disturb a leopard's dinner.  One swing of that giant head in our direction and watching his dark eyes fix on us convinced me that an orderly retreat was appropriate.

Our first game drive, after the leopard siting at camp, was impressive for the sheer variety of animals we saw.  While we did not encounter the herds that we had seen in Botswana, we saw four types of antelope, several birds, and a pride of lions within one half hour of leaving the camp.  The lions were consuming a buffalo carcass as we approached, and two cuddly lion cubs looked anything but as they tore into the meat.  All in all, quite a spectacle. 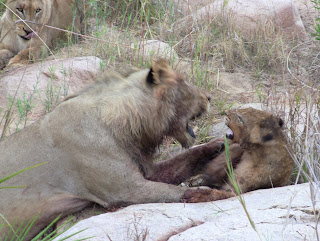 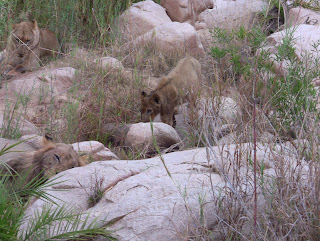 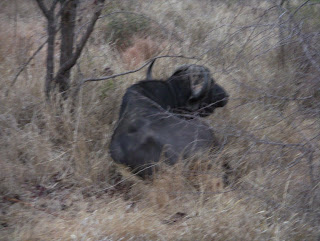 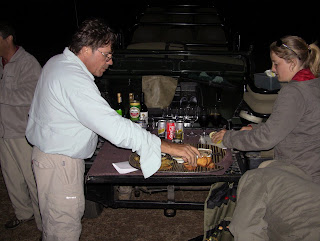 Sundowners with Marc and Nicky 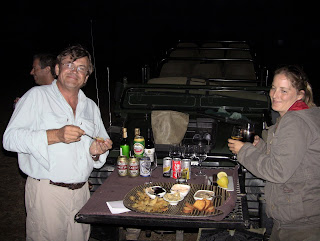 We enjoyed a fine dinner, accompanied by wine from the 5,000 bottle cellar, and Marc and I adjourned to the bar after the meal to enjoy Cuban cigars.  We gazed across the river, at the dark silhouettes of bushes and trees, and reflected on how blessed we are to have seen the things we've seen.  But we confess, even so, to being greedy:  now, we want to see a rhino.  Stay tuned.
Posted by Top Times Travel at 6:31 AM