I'll focus this entry on two game drive highlights which will be lasting memories.  The first involved compassion and strength, the second nature at its most primal.

In the morning drive, as the sun broke over the treetops and bathed the forest in a soft glow, we encountered a herd of at least fifty elephants.  When the saw us approaching, mature females quickly herded all calves to the middle of the pack and mature bulls turned, shoulder to shoulder, to face us.  The spectacle was moving and intimidating at the same time.  Watch braked as soon as the bulls moved into formation and we watched as the entire herd blended into the forest.  We drove back to the trail and parked after a short drive, watching from a distance as the elephants ambled from the trees and followed each other, nearly single file, around the far shore of a clear blue lake dotted with tiny islands and thick reeds. 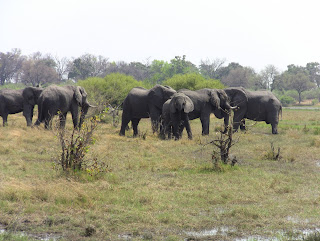 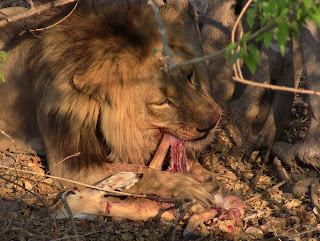 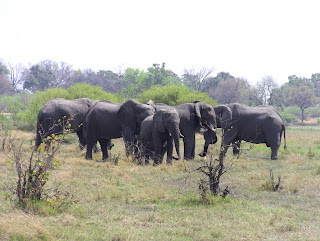 We've learned that elephants have become a controversial topic throughout Africa.  A herd is capable of destroying acres of forest, literally eating everything that is green and leaving denuded trees and broken tree trunks in its wake.  Botswana now has so many elephants that it tried to give some to Angola, which declined because it is having difficultly dealing with herds which have migrated from Namibia.  No one is sure what to do now.  Tourism is growing, and elephants are certainly an important part of that trade.  But when the elephants begin to devour the crops of villages there are growing calls for culling of the herds.  This has become a difficult subject and we'll see how the African nations deal with this in the coming years.

Our afternoon drive brought us face-to-face with a male lion patiently devouring what was left of an impala carcass.  Other than the occasional glance, he ignored us as he crunched through bone and flesh.  A mask of bright red covered his snout and jowls and the smell of blood was redolent in the thick air.  It was a stark reminder of how unforgiving nature can be.  Back at camp, the four of us sat huddled around the fire pit and talked about the lion and the impala, of lives and deaths, late into the night.
Posted by Top Times Travel at 1:54 AM