I'm writing now after finishing breakfast on the wooden deck adjacent to the Zambezi.  The weather so far has been picture perfect and today is no exception.  All of the meals and service at the Tongabezi have been great, but we've been particularly impressed by the guides.  We had two yesterday, one Zambian as we toured that side of Victoria Falls, and the other a Zimbabwean for our tour on that country's side of the Falls.  We discussed not only the geologic features of the waterfalls, but also the history of the area and customs of the local people.  The devastating impact of malaria remains a real problem here, claiming more than two million Africans every year.  Few can afford anti-malarial medications, and long term use harms the liver in any event.  For this reason, Africans say that the deadliest animal on the continent is the mosquito.

Following our Falls tour, we enjoyed tea at the Victoria Falls hotel, built in 1904, on the Zimbabwean side of the Falls.  While the hotel has been well maintained and the grounds are gorgeous, our trip through customs was not pleasant.  The administration of Robert Mugabe--President for Life--has destroyed the economy of what was once the breadbasket of Africa and signs of this were present in the border area.  Touts were omnipresent, hawking cheap carvings or trying to get us to buy worthless Zimbabwean currency as a souvenir.  The customs official took forever to allow us to re-enter Zambia, and young soldiers with machine guns lolled about at the gates. We were glad when we were finally waved through and the gates closed behind us.  Once we passed through and began the drive back to Tongabezi, however, we were rewarded with the sight of an elephant herd crossing a road near the highway and any inconvenience at the border was quickly forgotten. 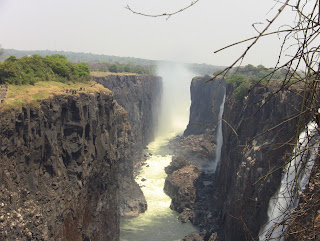 Yup! They jumped into that! 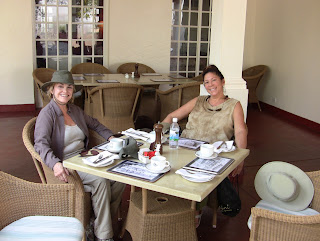 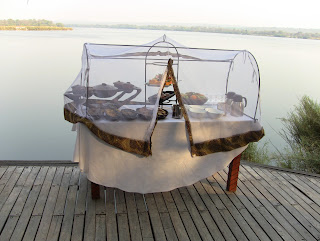 Breakfast on the Zambezi River 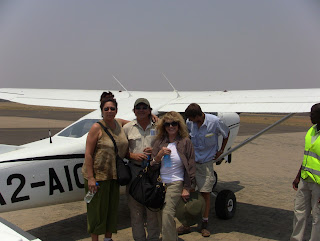 You want me to fly in that!!!!!!!
Linda's knee was bothering her during one part of the hike at the Falls, so she stopped to rest near the entrance way.  What she thought would be a relaxing bit of time soon turned interesting when a young soldier, armed with a rifle, slumped down beside her and fell asleep.  Moments later, a baboon tore the top off a nearby garbage container and raised primate hell in general, shrieking at the top of its lungs.   The soldier never moved and the baboon continued its antics until some of the park employees chased it away.  Linda has handled a lot in life but, despite being married to me, wasn't sure how to take on a baboon.

We are headed to Botswana this morning, although our travel schedule is apparently being changed and no one has any specifics.  I suppose we'll get there one way or another and we're all looking forward to it.  Our first two days here have been nothing short of spectacular.  The scenery is magnificent, the Tongabezi  stellar, and the wildlife fascinating.  And we never saw ourselves leaping into the Devil's Pool as the roaring waters of Victoria Falls thundered past just inches away.  We saw a sign in the Jo'berg airport that read "Life is not about the destination, but about the journey."  Here and now, for all of us, nothing seems more apt.
Posted by Top Times Travel at 11:59 PM