Relaxing in Bar 23 in the Merrion Hotel, while we waited for our rooms to be readied, was a pleasurable way to ease into Dublin.  Linda had flown in from New York, arriving that morning, and the three of us had a great time (fueled, in part, by pints of Guinness) catching up.  We took an afternoon bus tour of the city to orient ourselves and decide what we wanted to do later, and we concluded that tours of the Guinness and Jameson facilities would be high on our list.


Following dinner the first evening, we crossed from the restaurant over the Ha'penny Bridge to the Temple Bar district.  Unfortunately, the bars blare loud, American music and are frequented by over-served tourists.  At the suggestion of a cabbie, we visited the Palace Bar on the fringe of the Temple Bar area and were not disappointed.  The crowd was mostly Irish and a talented group of musicians played traditional Irish music.  It is amazing--at least to these Americans--how approachable the Irish people are and how quickly they will strike up a conversation or share a table.

The Guinness facility is immense, and the visit enjoyable.  Not to be missed is a trip to the top and the 360 degree views available from the glass-enclosed rooftop bar.   We followed that excursion with a few pub stops and lunch at the Stag's Head Victorian-style bar, a very handsome pub.  Our afternoon was spent at the site of the former Jameson's distillery (the whiskey is now brewed in Midelton, near Cork) and we had a nice visit there as well.  Of course, I suppose that after a tour of the Guinness brewery and a pub crawl, a visit to the sewer system might have seemed just fine.  We included a stop at what is supposedly the world's smallest pub, Dawson's, where it is impossible to fall down drunk because there is no room to collapse.  Our afternoon ended with a visit to the statute of Molly Malone, alive, alive, ohh.....which is supposedly the most photographed site in Dublin. 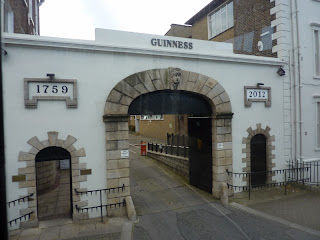 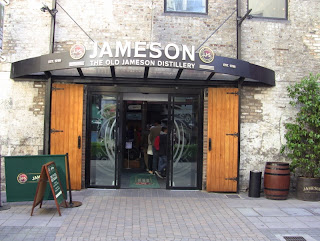 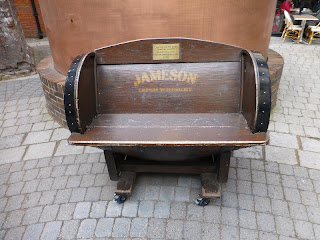 Doorway of the Stag's Head


The Stag's Head for lamb stew and a pint of Guiness

A visit to the Book of Kell's at Trinity College is a must, not just for the book but for the stunning library.  Christ Church is beautiful and the crypt below the cathedral is interesting.  An odd note is the framed remains of a cat and a rat which were trapped in an organ pipe and became mummified.


Costumes from "The Tudors" tv  show

Two restaurants worth mentioning are the Locke Brasserie, near the canal, which offers top-quality bistro food in a relaxed atmosphere, and Chapter One.  The latter restaurant is formal (at least a jacket for men) but the food is over the top, including an outstanding lamb and a rabbit that was the best I've tasted.  Finishing the night at O'Donnahue's, a traditional pub where the popular group The Dubliners got their start, was a great way to end our all-too-brief visit to the fair city of Dublin.

O'Donnahue's
Posted by Top Times Travel at 5:59 AM No comments:

I would have likely studied with more vigor had I attended one of the colleges of Cambridge University.  The grandeur of the colleges is overwhelming, as is the sense of walking in the footsteps of history as you traverse the grounds that have spawned 65 Nobel Prizes, the most of any university in the world.  Since its founding in 1209, Cambridge has grown into an institution that now encompasses 31 self-governing and independent colleges and regularly graduates students who progress to prominent careers in business, industry, and politics. 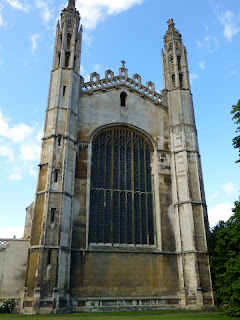 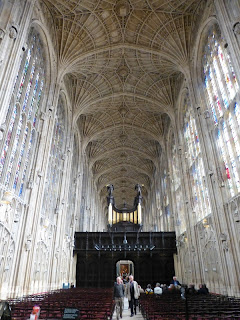 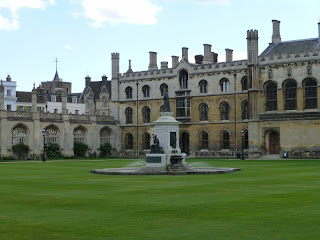 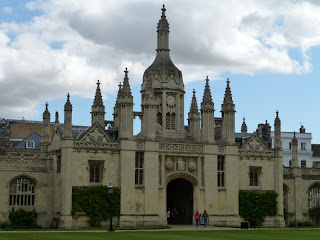 Another view from the courtyard 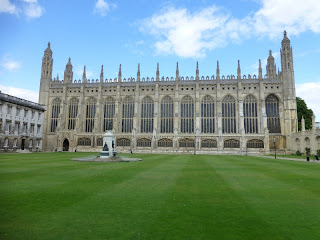 
The rivalry with Oxford--the only University in the English speaking world that is older than Cambridge--is legendary.  Less well known is the divide between University students and local residents of Cambridge, a gap known as the "Town and Gown".  While the origins of the schism may be many, locals still talk of the decision of the University to ban from its property any Cambridge resident who was afflicted with the Black Plague.

Of the many vignettes involving Cambridge history, one struck me as particularly amusing.  When Crick and Watson were fairly certain that they had unraveled the secret of the structure of DNA, they adjourned to a local bar to discuss their findings.  After convincing themselves that their studies were sound, they stood and announced to their fellow patrons at the Eagle that they had discovered the secret of life.  Apparently, they were met with bemused looks and tolerant grins.


Historically, punts were a mode of transporting goods to and between the various universities.  Today, they are a means of recreation for students and tourists and afford a great view of the university buildings which grace the shores of the River Cam.  Our punt operator suggested we pull into the docks at a nearby pub and enjoy a pint as we floated along.  My kind of guy. 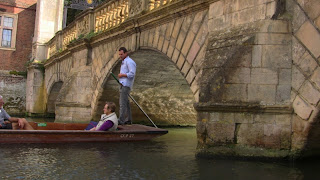 Cardiff, the largest city and capital of Wales, served as host for our last evening in the UK before flying to Dublin.  We stayed at the harborfront, in the new St. David's Hotel, and enjoyed sweeping views of the harbor and glistening sea.  Built as a port city, based on coal, Cardiff has seen some difficult times but there have been some very positive developments in recent years. Cardiff is justly proud of its gleaming and modern arena, the Millenium, home to its national rugby team, and has revitalized the port area with an assortment of trendy restaurants and shops. 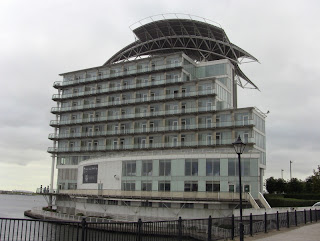 Cardiff Castle may be the number one tourist attraction and is worth a visit.  The views from the Norman Tower justify the climb and the restored chambers are of interest, particularly the beautiful library.  However, the relatively few rooms open to the public are fairly contemporary as the castle was most recently owned by the prominent Bute family (who made their fortune in coal) and reflect pre-WWII taste and style.  Windsor Castle this is not, but the large complex nevertheless holds an attraction of its own.

A pleasant boat ferry navigates the River Taff and runs from the downtown piers to an expansive park near the Castle.  If you ask, an attendant on the ferry will accompany you to a small outside deck where some interesting photo opportunities of the stadium and downtown are possible.  We exited at the downtown pier and hit a few local pubs, knowing that we needed to be well fortified for the short flight to Dublin in the morning.  The evening was brought to a fitting conclusion when we enjoyed Cuban cigars and 22-year-old Balvinnie on the outside deck at the St. David's.  The evening view of the river and the twinkling lights of downtown Cardiff provided a fitting memory of Wales.
Posted by Top Times Travel at 10:21 AM No comments:

Our first tourist attraction in London was Westminster Abbey, which never fails to impress with its ornate Gothic design and iconic facade.  Here, history is palpable--and that is not hyperbole for a site that has served as host for the coronation of every British monarch since 1066.  Those interned within Westminster include so many notable historical figures that it is incredible, and not only royalty is represented.  The remains of famous national figures such as Charles Darwin and Issac Newton also rest within the Abbey and taking in the assortment of engraved plaques and expressive busts is overwhelming.  One popular wing, the Poet's Corner, is crowded with memorials to famous writers, beginning with Chaucer.  Perhaps particularly moving is the Tomb of the Unknown Warrior, an unidentified soldier from WWI.  Of the many graves in Westminster, his is the only one that is forbidden to step on.

An equally gripping attraction is Churchill's War Rooms.  An underground warren of rooms from which Churchill guided the British war effort, the well-preserved displays bring into sharp focus the dedication and commitment of the Brits who labored to help win the war.  Huddled below ground, and shielded from German V-missile attacks by a five-foot thick concrete slab, these brave men and women toiled around the clock to promote and protect Allied interests.  From the Map Room, military officers from each branch were responsible for preparing daily intelligence summaries for the King, the Prime Minister, and the military chiefs of staff.  Churchill conducted 115 cabinet meetings from the Cabinet Room and maintained a grueling personal schedule, albeit one in which he did not neglect his beloved cigars or favorite drink. 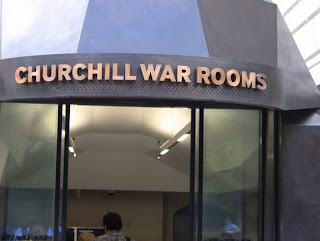 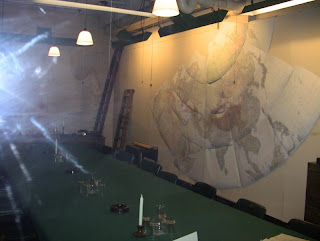 The storied British Museum houses an astounding collection of, well, just about everything.  I have now visited three times, for hours on end, and know that I have just begun to scratch the surface.  Always interesting are the Egyptian antiquities and the famed Elgin marbles.  I'm not going to weigh in on the longstanding dispute between England and Greece over ownership of the sculptures, but simply note that wherever they are housed their haunting beauty will remain timeless.  That the centuries-old eyes of a carved horse can still captivate the viewer is astonishing.


A small sample of the Elgin Marbles

No visit to London would be complete without a pub crawl, or two.  We enjoyed several in Mayfair, then headed to Fleet Street for some standard pub grub--a Scotch egg, chips and fish (with mushy peas), and steak and kidney pie.  Our nightcap was at the storied Ye Olde Cheshire Cheese, reputedly London's oldest pub.  Although we strolled though the many dark rooms of the multi-storied pub, mindful of the low, dark beams and dim lighting, our favorite perch was atop a stool in the cheerfully cluttered first floor bar.  The jovial barmaid regaled us with many stories, including those involving a stuffed parrot named Polly.  She claimed that the bird--when alive--was capable of cursing in seven languages and was the basis for the famous question, "Polly want a cracker?"  I don't know if she was pulling our leg or not, but after my third pint I believed every word she said. 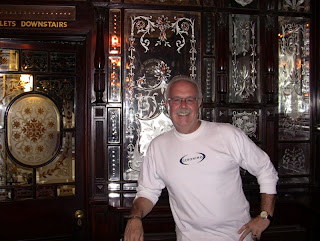 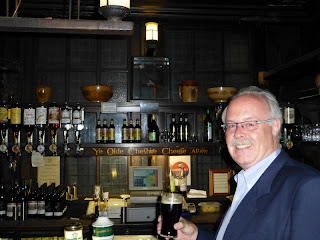 Guinness at the Old Cheshire 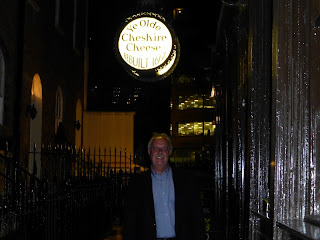 Posted by Top Times Travel at 11:16 AM No comments: