Our guide, Lila, met us at the hotel lobby.  While we waited for Linda, I asked her if it was okay if I tried speaking with her in Spanish.  She said that would be fine, but seemed slightly hesitant. I found out why later in the day.


The tour was great and we saw some fantastic sites.  Lila was very knowledgeable and loved sharing details of her beloved Barcelona with us.  We toured the Sagrada Familia, designed by the famous architect Gaudi, and marvelled at the fantastic details of the edifice.  Construction was on-going, and will be for some time, to judge by the ambitious plans for further expansion.  Some criticize these plans, contending that they far exceed Gaudi's vision, but none can deny that the ultimate effect will be more surreal than any other structure.  Like it or not, it is certainly something different and well worth a visit. 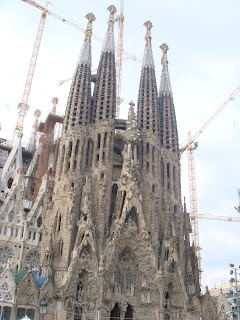 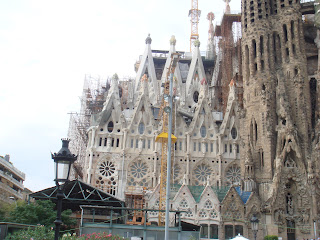 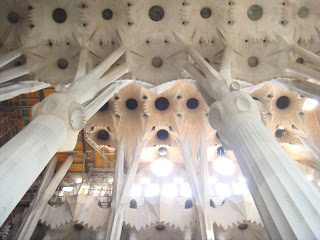 Ceiling and columns
So, too, is Park Guell, designed by Gaudi.  A sinuous multi-colored bench he designed, which wraps around a clearing in the park, affords stunning views of the City.  Walkways suddenly turn in to tunnels, with astonishing columns supporting the ceiling.  The park was full of families and tourists and carried a very festive atmosphere. 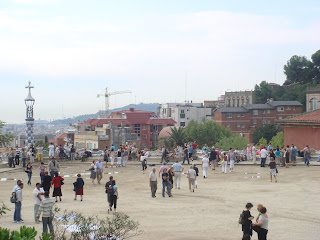 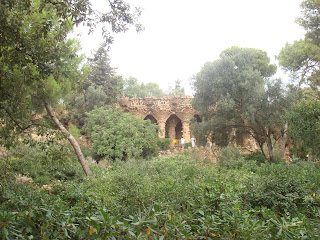 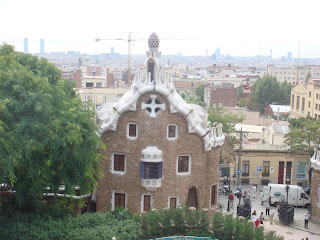 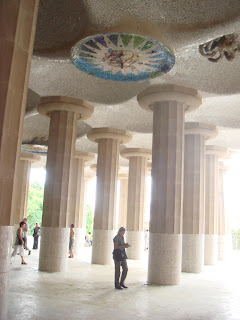 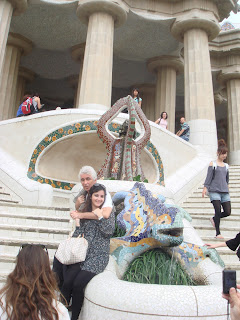 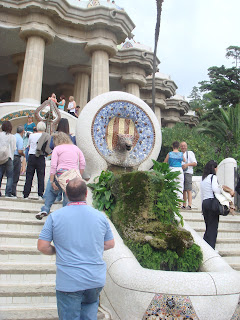 We lunched at the time-honored 4 Gats (Catalan for 'cats'), with tiled floors and dark panelling.  Four young artists established the restaurant and Picasso had his first exhibition there in 1900 at the age of 18.  Lila joined us for lunch and we talked extensively of the Catalonia's history and culture.  She explained that she was pleased to speak Spanish with me because I had asked politely.  Normally, she refuses to speak in any language but Catalan. She views the region as Catalonia, not really Spain except for the political affiliation, and believes that people should speak Catalan and not Spanish when in Catalonia.  For example, many Argentines immigrated to the Catalan region in 2001-2002 when Argentina was experiencing its economic crisis.  Lila will not speak Spanish with them--if they settle in Catalonia, she believes it is there obligation to learn Catalan.

They teach little Spanish in Catalonia's schools, a sharp contrast to the days of Franco when he repressed all things Catalan.  Signs are  typically bilingual or in Catalan.  It is an interesting language, with ten vowels.  Lila noted that it is not related to Basque, which is incomprehensible to them.  There is also a fourth common language in Spain, Galicean, near Portugal, but it is really a romance language and not a Portuguese dialect.

Fortunately, we were in Barcelona as the Festes de la Merce began, an annual festival unique to the Catalan region.  Huge wooden costumed figures are paraded through the streets and performances and contests abound  I visited the Plaza San Juame (St. James Square) in the middle of the Gothic quarter--a truly fascinating section of twisting, narrow, cobblestone streets--and watched the castellers compete.  The idea is to form human pyramids as tall as possible and it was amazing to watch the men interlock arms as other climbed atop them to, again, interlock arms while a third layer clambered aboard.  They would reach 6-7 stories high, with young boys being the last to make the dizzying climb to the top.  One pyramid collapsed as we watch, the crowd gasping, but they all seemed to slowly tumble in a heap and no one appeared injured.  The entire contest has a medieval feel to it as each team wears uniforms of different colors and all parade before the crowd, packed into the aged square, prior to the competition. 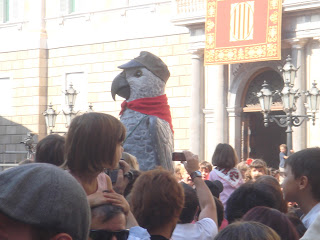 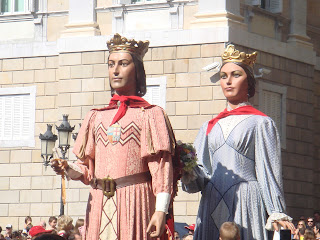 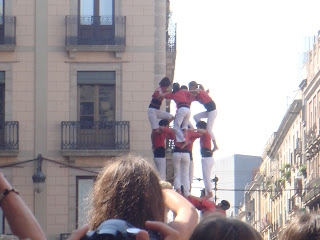 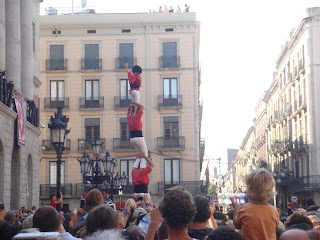 Lila introduced us to carajillo, a coffee flavored with brandy.  The same concoction with milk is called a trifasico.  Either one is a magnificent way to end a lunch.   The meals in Barcelona were memorable and I'll mention a few restaurants of note: Alkimia was and we had a multi-course meal that exceeded expectations.  Cured ham paired with a glass of olive oil, mussel soup with cheese, pickled oyster with spinach and pork cheek, caviar atop bone marrow, a soft-poached egg bonbon, shoulder of young lamb--how we ate it all I'll never know.  We ended with dessert of black chocolate with rum and raspberry cream, over coconut ice cream.  This was paired with a Pedro Ximenez Tradicion Jerez, a dessert wine that tasted almost like Kahlua.

Another restaurant not to miss is La Dama, one of those rare restaurants where the setting is as spectacular as the food.  Housed in an art deco building, the details are truly spectacular.  Don't miss the art deco elevator in the lobby which is a gleaming design of pure whimsy. 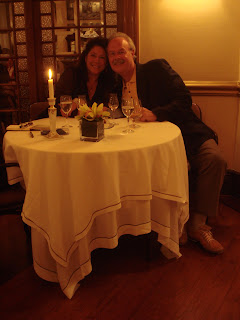 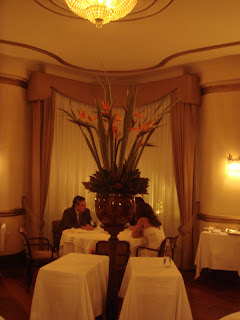 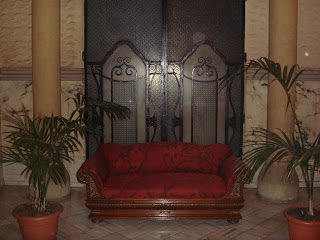 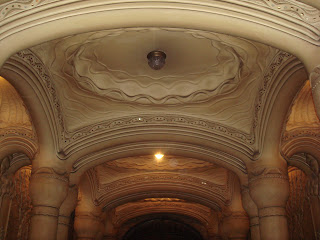 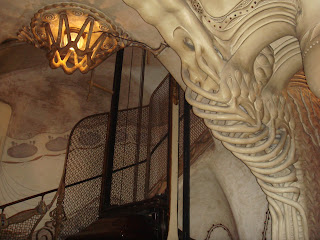 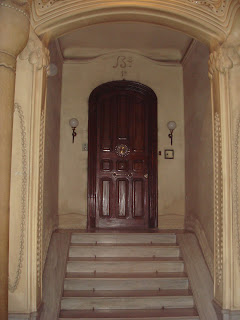 The final restaurant I'll mention is Los Carrcoles, established in 1835.  The dark wood and mirrored bar is decorated with slabs of cured ham strung from the low ceiling.  The small dining room has colorful tiles on the walls and a dark, beamed ceiling.  Food was great, including a delectable serving of razor clams.  For dessert, we ordered trifasico and they left the bottle of rum on the table for us to pour as we pleased.


Our final two tourist sites were the Tidabo, a mountain looming 1600 feet over the City and providing a beautiful panoramic view.  Tidabo was the location of the 1992 Summer Olympics and the buildings constructed then, such as the pool, are now devoted to civic use.  We then toured the magnificent Cathedral, reminiscent of Westminster Abbey, particularly with respect to some of the ceiling architectural details.  The choir area is stunning and we enjoyed the pond in the courtyard, with its swans and turtles, as well. 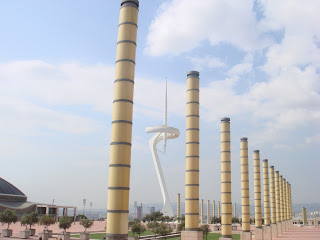 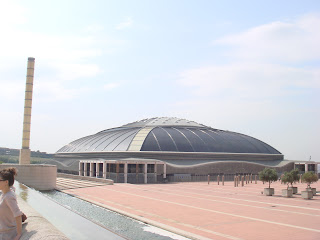 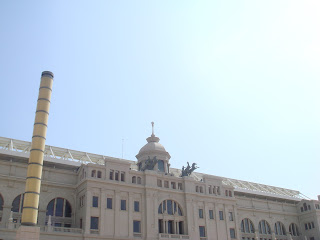 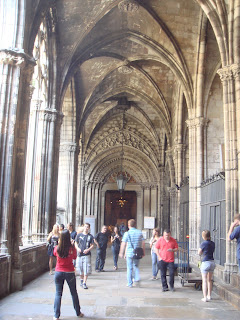 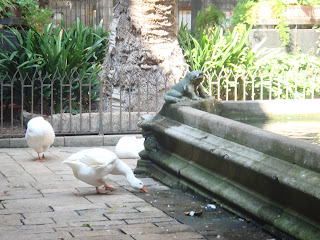 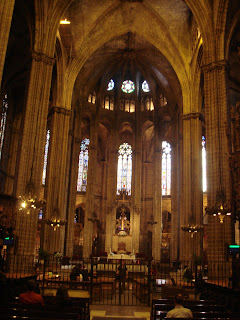 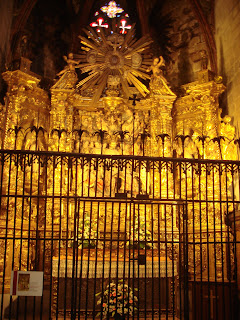 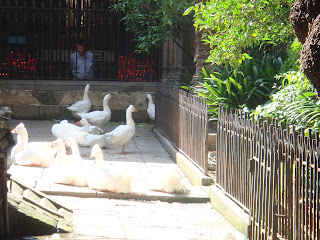 Posted by Top Times Travel at 9:44 AM No comments: