Our day began at 5:30 when a sharp rap on the door rousted us for coffee, tea, and biscuits in the room, to be followed by a light breakfast in the lodge and a departure at 6:30 sharp.   Bleary-eyed, we trudged along and clambered aboard the four-by-fours.  The vehicles are well-designed to comfortably accommodate six people, with each seat elevated higher than the one before it so that no one's view is obstructed.  With just four in our party, and our guide--whose name is Watch, yes, like what is worn on one's wrist--we have plenty of room.

Watch has worked as a guide for over 11 years and knows so much about the animals here it is incredible.  We are fortunate to have him.  As a bonus, he seems to enjoy the sense of humor which Marc and I possess and Linda and Patti tolerate.  In the first half hour of our drive, we encountered skittish zebra, cape buffalo which were decidedly non-skittish and seemed to dare us to come closer, and three female lions. 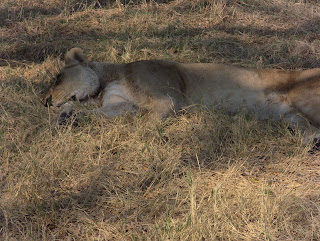 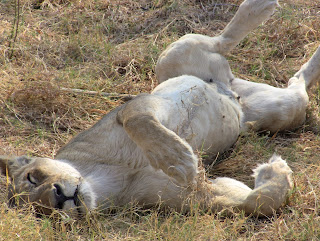 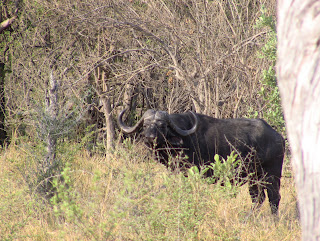 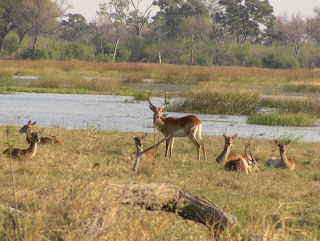 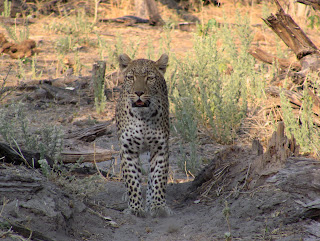 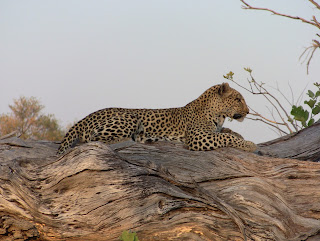 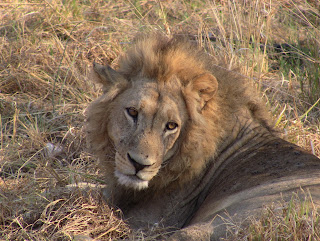 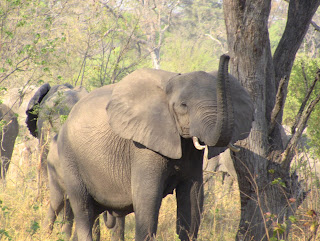 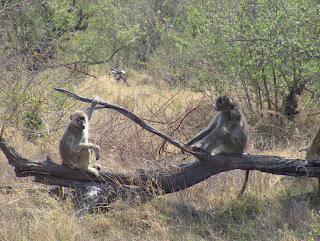 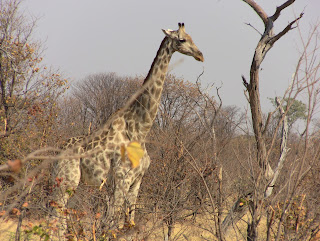 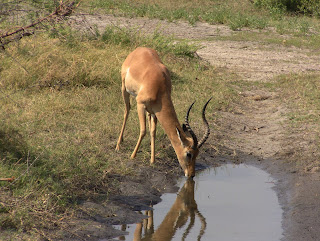 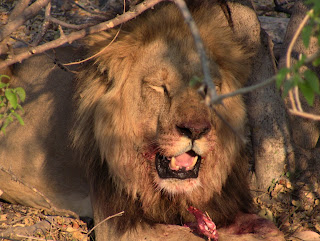 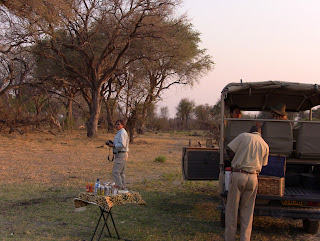 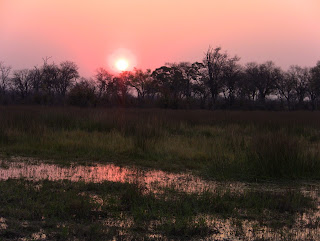 The lions, blending in so well with the savannah grass that we would not have seen them absent Watch, appeared amazingly docile and unfazed as we approached.  Watch explained that not only are they accustomed to vehicles, but they think that we are just one large clanking object that does not smell like game due to a combination of DEET, deodorant, soap, and the vehicle's gasoline.  If you stay in the four-by-four there will be no problem, a reassuring thought when one of the females arose and passed by less than two feet away.  I carefully positioned myself behind Marc.

Step out of the vehicle, however, and the cats will prove they are not so docile.  Watch related the story of a tourist two years ago who, convinced that the sleeping cats posed no threat, hopped out--ignoring the guide--for the ultimate photo op.  What he got was ultimate, but it wasn't a pretty picture.  The lions were on him in seconds.

After a time spent watching the lions loll about, we were rewarded when they arose, in unison, and marched off to hunt.  They appeared to glide through the tall yellow grass, one following the other, and I could only imagine the three of them descending upon an impala or zebra.  Hundreds of pounds of guile and muscle on a deadly prowl.

We returned to the camp for brunch and an afternoon break.  Following a late afternoon tea (or a beer for the guy from Cleveland) we headed out for the evening drive and one of our best experiences yet.  Watch spotted leopard tracks and, not long afterwards, we saw the leopard itself strolling along the edge of a clearing.  Watch positioned our vehicle directly in it path.  I kept waiting for the cat to break away as it approached but it marched to within a yard of us before turning.  Its patterned coat gleamed in the late afternoon sun and its dark eyes were captivating.

Watch expertly followed the leopard for the next hour, anticipating where it might reappear from the forest when the growth was too thick for the four-by-four.  At one point, with an alacrity that was difficult to comprehend, the leopard raced into a flock of birds and attempted, albeit unsuccessfully, to swat one from the air.  Eventually, the cat crawled atop a fallen tree, arched over the forest floor in a clearing and, with a casual look at us, stretched into a rest.  We had a great photo op handed to us and took full advantage.  The leopard seemed to relish the attention so much that Patti nicknamed it Zsa Zsa.

As the sun began to set, we had no choice but to leave Zsa Zsa to its own little kingdom and wish it successful hunting.  The drive to camp took longer than expected because the route Watch had chosen was blocked by foraging elephants.  They weren't moving, so we did.  Our reward for the delay was the sighting of an elusive civet, a small animal that looks like a cross between a cat and a raccoon.  Watch had not seen one in fifteen years.

Upon our return to camp, we adjourned after dinner to the fire pit and, as Marc and I puffed on cigars, we stared at the brilliant night sky which seemed to stretch forever.  The stars, like diamonds sprinkled on a dark cloth, gleamed and twinkled.  Our conversation drifted away as we all reflected on what we'd seen and what treasures remain to be discovered as our adventure continues.
Posted by Top Times Travel at 4:41 AM