Bangkok: Of Golden and Emerald Buddhas, the Monkey King, and a Bar in the Sky

Bangkok pulsates.  From the moment you arrive at the mammoth Suvarnabhumi International Airport, this is a city of non-stop riotous commotion.  We checked into the Mandarin Oriental, on the bank of the serpentine Chao Phraya river, and caught some sleep after over thirty long hours in airports and planes.  Despite being exhausted after the long flights, the stunning view from the window of the Mandarin kept me awake for some time--a swirl of lights spiraling from the ground to the tops of lofty skyscrapers and lighted boats plying the dark waters of the river.  Bangkok.

The first day was overwhelming.   Our guide, Tony, led us first to Wat Traimit, the Temple of the Golden Buddha.   The Temple itself is not particularly impressive, constructed fairly recently specifically to house the Buddha, but the Golden Buddha itself is jaw-dropping--5.5 tons of solid gold.  Interestingly, to protect the Buddha from invading Burmese, it was covered with plaster ages ago.  While being moved to a new shelter in the mid-1950's, the Buddha was dropped from a crane and a monk inspecting the cracked plaster discovered the true nature of the Buddha. 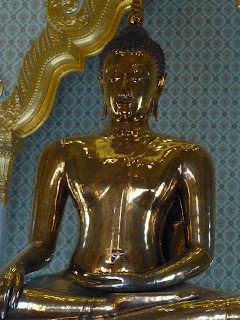 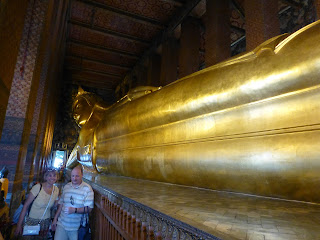 The Reclining Buddha
Perhaps even more striking was our visit to Wat Pho, housing the famous reclining Buddha--all 148 feet of it crammed into a long and narrow temple.  The Buddha's mammoth feet are crafted from mother of pearl.  Wat Pho is a fascinating complex, home to Thailand's first university and the birthplace of Thai massage.

While our morning tour was amazing, the afternoon visit to the Grand Palace exceeded all expectations.  The complex is a maze of soaring stupas and striking temples, pitched so closely together that taking everything in is overwhelming.  Despite the stifling heat--98 degrees and humid as a bucket of tepid water--we strolled the grounds like kids at a candy store, eagerly awaiting the next architectural wonder.  One of the highlights is certainly the Emerald Buddha, carved from a single piece of nephrite, a type of jade.  Wars with Burma were fought over this Buddha, with the Thai people eventually capturing it and enshrining the Buddha within the Grand Palace complex.
Also impressive are the 178 Ramakian murals, wrapping around a 2km cloister, and depicting the epic clash of humans uniting with the monkey king to conquer an evil alliance of enemy humans and demons, all to reunite a pair of young lovers. 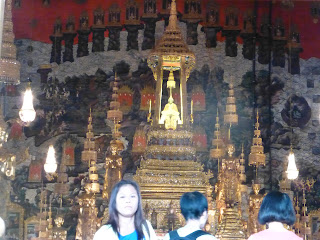 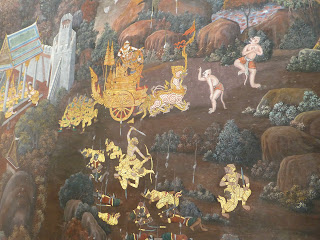 
A few particularly colorful temples are crafted from English pottery that was broken in the holds of ships crossing the ocean.  The striking Phra Si Rattana Chedi is covered with golden tile imported from Italy.  The throne hall, Chakri Maha Prasat, is a fusion of Thai and European architectural styles.  Despite the oppressive heat and humidity, I left the Grand Palace reluctantly because it truly is a complex where another surprise lurks beyond every corner. 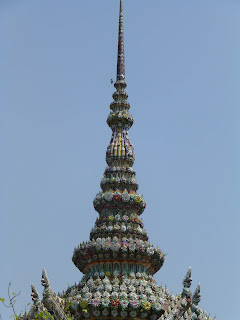 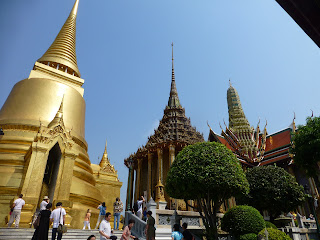 We capped our evening with a visit to the open-air Sky Bar and Sirocco restaurant, perched atop the 63rd floor of the State Tower Building.  When you walk outside, a winding, vertigo-inducing, staircase leads to the oval shaped bar which is cantilevered over the cityscape far below.  Not a view for the faint of heart, but a few stiff drinks seem to help one cope with the sheer drop to the ant-like figures scurrying about the hectic streets 63 stories down.  We enjoyed dinner while a jazz quartet played from an elevated platform and then concluded our evening with a cigar and cocktail back at the Mandarin.  All in all, not a bad first day in the boisterous and fascinating city of Bangkok. 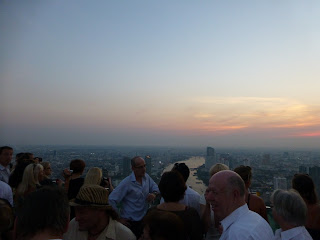 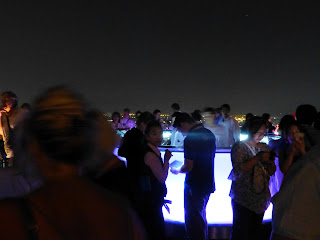 Posted by Top Times Travel at 9:17 AM