A short flight from Bangkok brought us to Phnom Penh, Cambodia and our new guide, Sky.  It is immediately noticeable that impoverished Cambodia lacks the glitter of relatively affluent Thailand.  Traffic alone tells the tale.  Whereas nearly everyone in Thailand seems to have an auto (with the assistance of government subsidies), cars are nowhere near as common in Cambodia and nearly everyone, it seems, navigates the city on motorcycles or, to a lesser extent, bicycles.  Tuk-tuks, called remorks in Cambodia, are omnipresent.  And Phnom Penh traffic makes Bangkok traffic look tame.

Motorcycles weave through any open space and swerve mere inches away from other traffic.  Remorks do the same thing.  So do cars.  And pedestrians. I have never witnessed roads more chaotic in my life.  At the few traffic lights, motorcycles jockey to the front and take off in a group as soon as someone senses that the light is about to change.  At most intersections, there is no light so people just go and assume that someone else will stop.  Left turns are an adventure. Complicating matters is the apparently common practice of driving on the wrong side of the street.   Accordingly, it was not unusual for oncoming traffic to be on both sides of our vehicle.

When we finally reached the Raffles Hotel Le Royal, we were ready for a drink and nestled into the Elephant Bar.  The room seemed to have been preserved from the days of the French occupation and retained a whiff of the colonial era.  The entire property had an air of faded glory--everything was clean and well-maintained, but nothing appears to have been remodeled.  The uniformed staff were indefatigably polite and waited on everyone hand and foot.  It seemed as though we had stepped back in time and the hotel was one of the most enjoyable that I've ever visited. 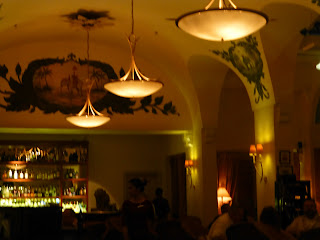 We toured Phnom Penh and it is evident that the country is still recovering from the havoc wreaked by the Khmer Rouge in the 1970's--and more on that in the next post.  Sky was a child of six when the Khmer Rouge took over.  Separated from his family, he worked at a camp making fertilizer from human and animal waste, plant material, and crumbled termite mounds.  He explained that the teenage guards pretty much left them to fend for themselves and that the kids typically slept outside under trees.  The following dialogue was eye-opening:

Me: "You must have been terrified sleeping in the forest, with all of the snakes and insects."

Sky: "Are you kidding me?  We prayed for snakes and insects because that meant we had food."

Even today, Phnom Penh has fewer residents than it did before the Khmer Rouge evacuated the city in pursuit of creating a self-sufficient agrarian economy.  Seventy-five percent of the people of Sky's age are illiterate.  Average income is $2.00 a day.  Poverty is reflected in the housing and clothing of the people and the general lack of maintenance of public areas.  Cobwebs clung to statutes in the National Museum.  As Sky said, however, people at least smile now and believe that the country has a future.

Much of the Royal Palace was shuttered during our visit due to the recent death of the King.  We also toured the Central Market, although several stalls were closed due to the Chinese New Year and the substantial Chinese population in Phnom Penh.  A highlight, however, was visiting Wat Penh and witnessing a Lion Dance in celebration of the New Year. 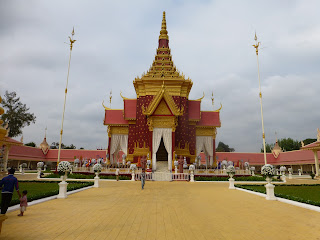 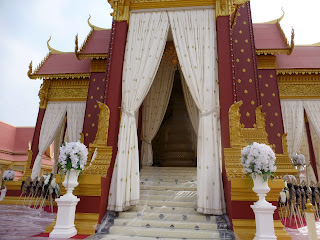 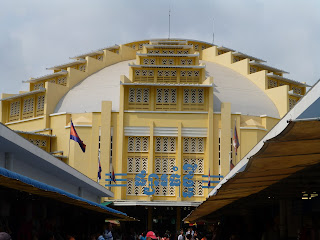 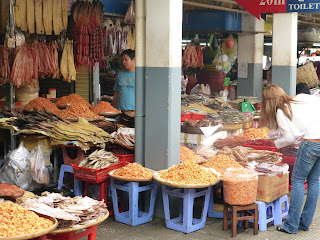 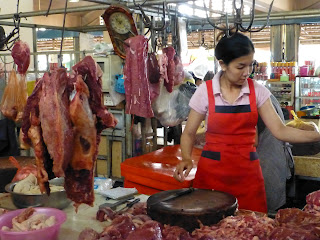 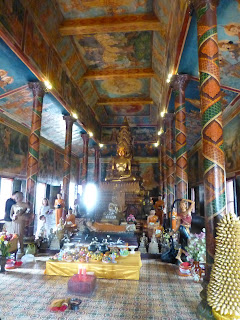 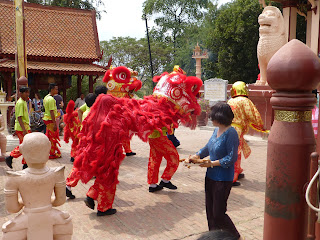 
A recommended spot for dinner is Komdeng Restaurant, which features Cambodian cuisine and cocktails prepared with local fruits.  I had deep-fried tarantulas for an appetizer--a little crunchy in spots due to the carapace, but with a mild flesh.  That was followed by squid stuffed with pork, shrimp, and black mushrooms with a koh kong sauce.  Good service and nice atmosphere, although I am still trying to convince myself that the small, black creature which scurried across the floor during dinner was a cat. 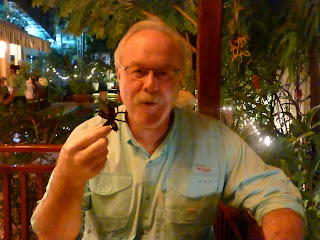