You can read all the superlatives you want about Angkor Wat, but not really comprehend the scope, complexity, and ornateness of the temples until that first vast moat is crossed, the first stone bridge traversed, and the first stupas come into sharp focus beneath a bright blue sky.  Hundreds of temples survive today and selecting an itinerary is difficult.

We began with Angkor Thom--and an elephant ride.  Touristy, yes, but it forces you to accept the elephant's lumbering pace and enjoy the view from an unusually elevated perspective.  It is impossible not to imagine what it must have been like when Angkor--with a population of one million when a mere 50,000 souls lived in London--teemed with people and elephants were a common mode of transport.  Only the temples, made of sandstone quarried more than twenty miles away and floated downriver on rafts, survive today.  All houses have long since vanished as they were made of wood--sandstone was only for the gods. 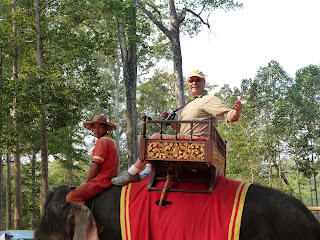 They found an elephant big enough... 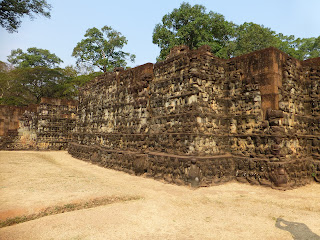 Terrace of the Leper Kings 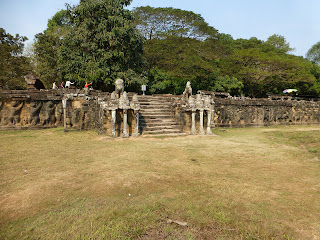 Terrace of the Elephants

Angkor Thom includes the immense Terrace of the Elephants, used as a viewing stand for public ceremonies, which features sculpted elephants flanking every staircase.  The nearby Terrace of the Leper Kings, supposedly named for two Angkor kings who were afflicted with the disease, is richly decorated with tiers of elaborate carvings.  The Bayon, the center of Angkor Thom, features bas-reliefs displaying more than 11,000 figures depicting all aspects of everyday life in Cambodia during the 12th-century.  After climbing a narrow set of stairs, more than 200 staring stone faces great every visitor. 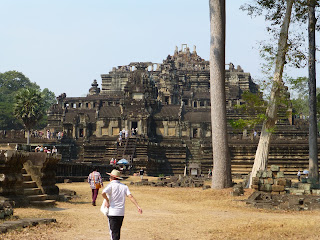 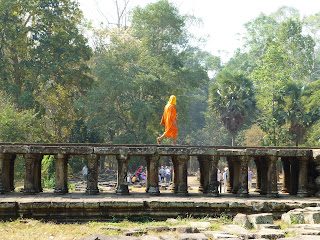 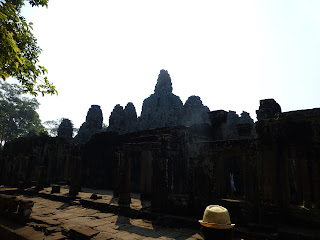 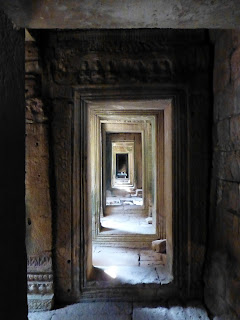 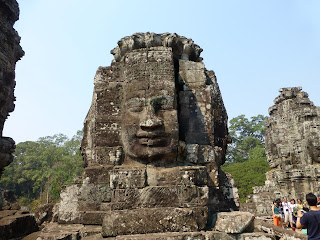 Angkor Wat is reached after crossing a moat far wider than any I've seen in Europe or Japan.  The temple complex itself is the largest religious building in the world and the bas-relief along the outer walls is the longest continuous bas-relief anywhere.  The best preserved temple in Angkor, Angkor Wat is beautiful on many levels--its immense size, brilliant architecture, and the delicate artistry of the carvings that line seemingly every surface. 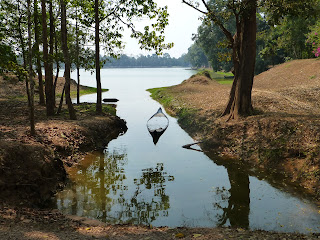 A branch of the immense moat 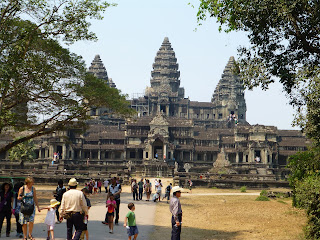 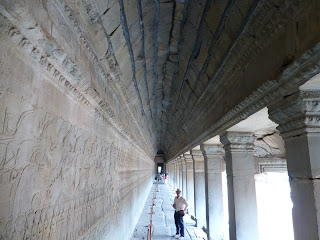 A section of the bas-relief 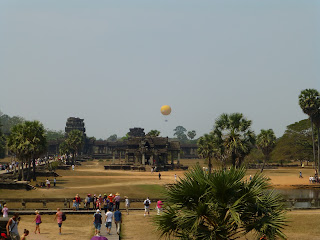 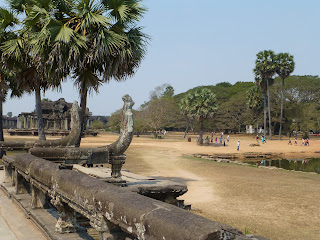 It is interesting to note that much of Angkor had been reclaimed by the jungle until the French decided to excavate the temple ruins.  A visit to Ta Prohm underscores the fact that nature can reclaim anything built by humans.  Ta Prohm seems ripped from a movie set and, indeed, scenes from Laura Croft Tomb Raider were filmed there.  There is a feral beauty in the way the tree roots have locked the crumbling stones in a tight embrace. 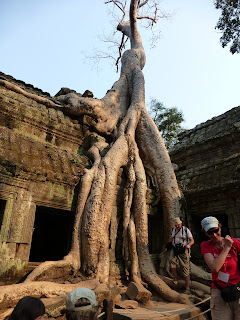 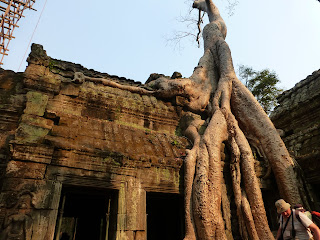 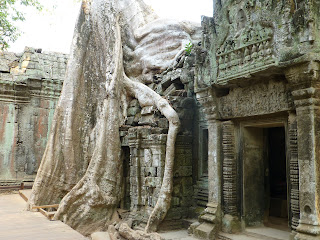 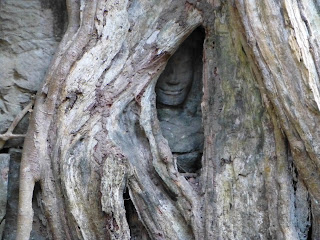 A face obscured in the tree trunk 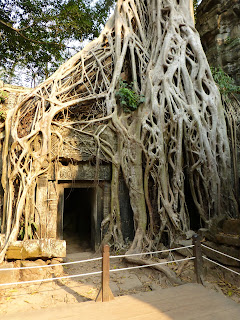 We stayed in Siem Reap at the Raffles Grand Hotel D'Angkor, again enjoying superb service and accommodations.  This Raffles location acquired the property from another hotelier and updated it, although it preserved many original features including a mahogany elevator from the 1920's. 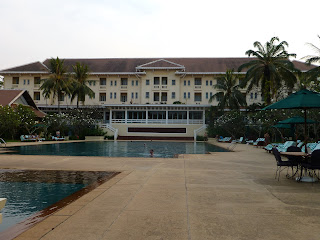 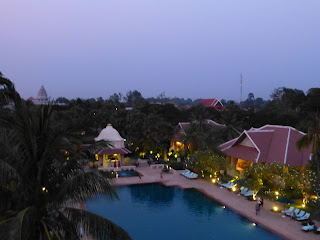 We enjoyed an evening on Pub Street, named--well, you can figure that out.  Dinner was at a fine restaurant called Wat Damnak, which specializes in fresh and locally sourced ingredients.  They offer two tasting menus each evening in very cool space that is off the beaten path and well worth the brief remork ride.  I dined on fried Sanday fish with a pomelo and elephant ear taro stem salad, black sticky rice with crispy duck, Mekong langoustine with seared tiger eggplant and, for dessert, wild Cambodian cinnamon and chocolate light ganache.  This was my favorite meal in Cambodia except, of course, for the tarantulas. 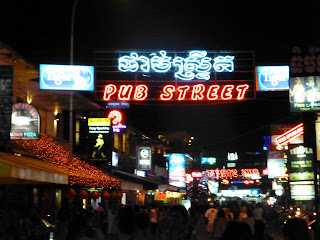