Ancient Kingdoms, the Flower Market, and the Business of Sex

The second day of our trip brought us to Ayuthya, the capital of Siam for over 400 years, located approximately 50 miles from Bangkok.  The ruins of the ancient city sprawl forever and make for some fascinating exploration.  Wat Phra Mahathat has a captivating sight: a Buddha head engulfed by tree roots.  Wat Prha Si Sanphet is a warren of stupas.  It was the palace for several kings and each king was expected to erect a stupa for his parents and other family members, so the proliferation of stupas at Wat Prha is likely unmatched. 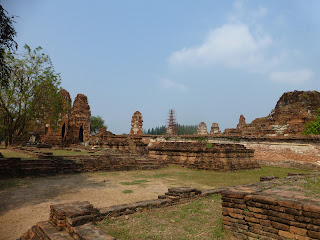 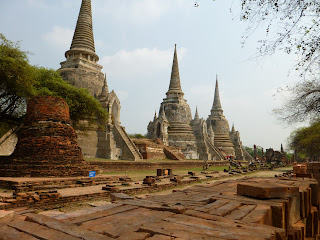 We next toured the sprawling Summer Palace of King Rama V at Bang-Pa-In.  The complex features a variety of architecture, including European, Chinese, and Thai.  Through a combination of ceding territory and playing various European interests against each other, Thailand was one of the few Indochinese countries that was never colonized.  For example, when the King was concerned that the English and French were becoming too aggressive, he invited the Russian Czar to visit the Summer Palace and forged a relationship with Russia. 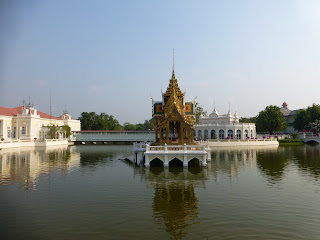 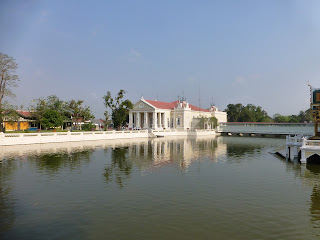 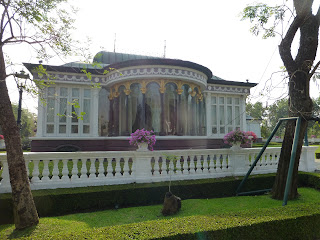 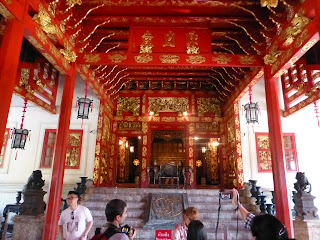 We returned to Bangkok by riverboat, with a forgettable buffet lunch but memorable cold beers, and enjoyed the ever-changing view of the riverbank.  Dilapidated fishing shacks contrasted with the glitz of Bangkok, and the river teemed with boats of every variety, from barges to tiny canoe-like vessels.  Boats with huge rear engines and extended propellers stood out as they zipped along.  They have been called "James Bond" boats after such vessels appeared in "The Man with the Golden Gun." 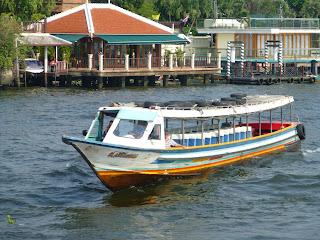 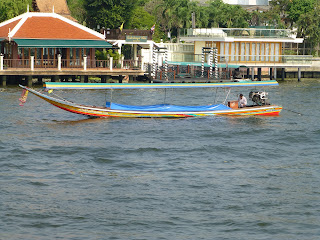 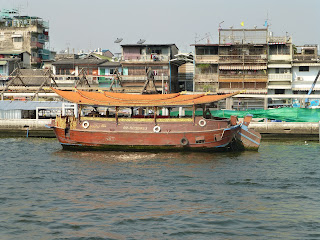 After a rest at the hotel, we met our guide for an evening tour of the city.  Our first stop was the Flower Market, which stretched for blocks and teemed with people.  The flowers--including more orchids than I've ever seen--were dirt cheap and the scene was chaotic.  The narrow lane between flower stands was difficult to navigate and the food vendors and the clacking tuk-tuks and the roaring autos and the bustle of human beings seemed to blend into a kind of choreographed chaos.  The colorful, raucous scene was fascinating. 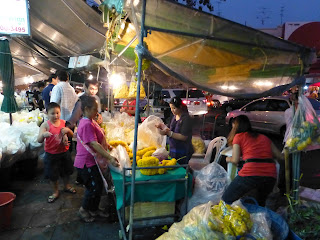 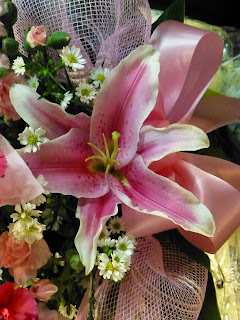 The illuminated temples were beautiful as well.  We had dinner at Supatra River House, a fine restaurant on the riverbank, and enjoyed the spectacular view of Bangkok at night.  Standout items included Tom Yum Kung, a slightly spicy coconut based soup with prawns, and a terrific soft shelled crab with steamed rice.  We really enjoyed Thai food, and the breakfasts were particularly interesting because of the variety of fresh fruit.  Standouts included mangosteen, longan, dragon fruit, and rambutan.  I'd sampled some of these before, but others--like longan (shielded by as thick skin, the grape-like fruit inside reminded me of lychee)--were unfamiliar. 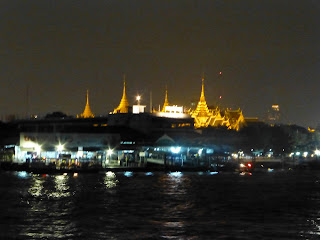 We had our first tuk-tuk ride and it was a blast.  Nothing felt so foreign to me as racing along the streets of Bangkok in what essentially amounts to an open-air carriage affixed to the rear of a motorcyle.  And the drivers are fearless, jockeying around and between trucks and autos as if they weren't there and rocketing inches past pedestrians who seem accustomed to near-death collisions. 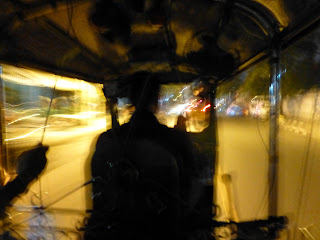 After dinner, we strolled the storied Khao Sarn Road and found the jarring cacophony interesting.  Hustlers of every race, creed, and color offered massages or prostitutes.  Street food vendors hawked scorpions on a stick and a variety of other bugs--photos were one dollar.  Several entrepreneurs openly offered fake ID's and nightclubs blasted American music.  Women of the evening flashed hard stares and smiles from sidewalk patios.  Pedestrian traffic, a melange of backpackers, middle-aged tourists, and locals hustling for a buck, was shoulder-to-shoulder.  What Khao Sarn Road lacks in glamour in makes up for in sheer chaos.

We paid a brief visit to Patpong, one of Bangkok's infamous 'entertainment' districts, afterwards.  Actually, we made it as far as the adjacent Patong night market before I wearied of the constant propositioning and jostling.  Prostitution is an accepted way of life in Bangkok, as are the 'ladyboys'--men who impersonate women--and it is understood that a significant part of the tourism industry consists of 'sextourists' who visit Thailand for reasons that have little to do with temples.  Curiously, prostitution is totally illegal but thrives, apparently due to the ageless combination of money and corruption.  A sharp contrast, indeed, to the beauty of illuminated temples and the gentle flow of the Chao Phraya river.
Posted by Top Times Travel at 9:21 AM