Named for the day it was discovered by a Dutch explorer in 1722, Easter Island is truly unique. One of the most remote inhabited places in the world, the island is justly famous for its unique Moai statues, of which nearly 1,000 are scattered over the stark terrain. In 1995, UNESCO declared Easter Island a World Heritage Site. 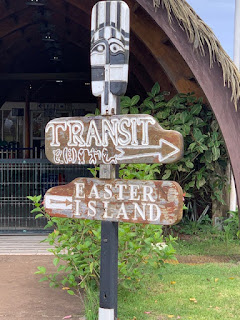 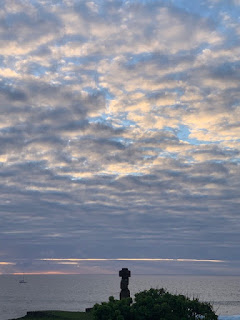 The island has a tortured history. It is believed that Polynesian people first settled the isolated dot in the Pacific around the 12th century AD. From a peak of approximately 15,000 souls, the islands population had dropped to around 2,500 when Europeans arrived. There are many theories about what transpired--deforestation, civil wars, even cannibalism--but the situation deteriorated even further after contact with the Western world. Slave trading, smallpox, and forced evacuations left a population in 1877 of  a mere 111 people. The island was annexed by Chile in 1888, and today the population is approximately 7700, with 45% considering themselves to be native Polynesians, or "Rapa Nui." 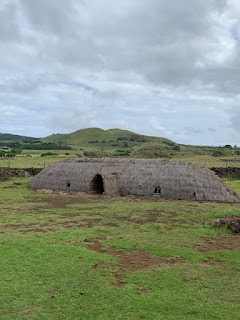 Reconstruction of a communal home 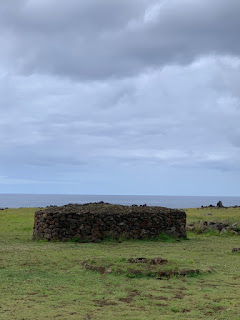 Reconstruction of a stone chicken coop 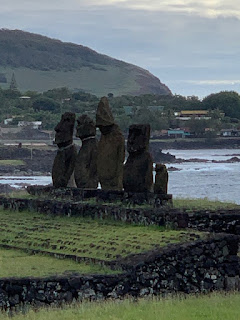 No Moai remained standing when French missionaries arrived in the 1860's. It is believed that they were all toppled during the island's long period of civil wars. If one group knocked another's statutes to the ground, it believed that their rival's socio-spiritual power was destroyed. Each statue represented a deceased person of importance, somewhat akin to a 'chieftain.' 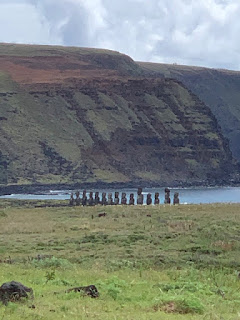 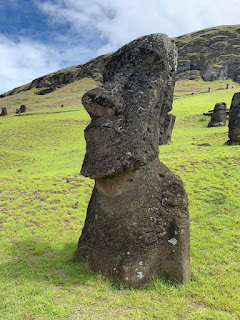 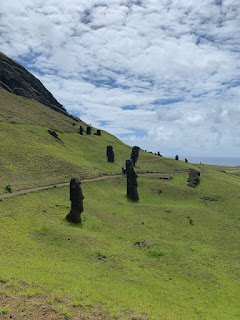 Many of the statues remain at the quarry site, Ranu Raraku, where they were typically carved from soft volcanic tuff. 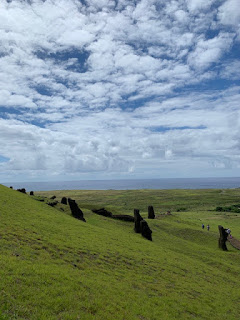 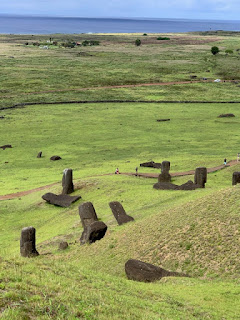 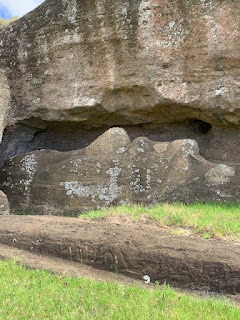 This would have been the largest Moai ever sculpted. 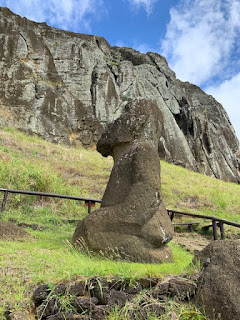 This was the first Moai returned to an upright position, in a project headed by famed explorer Thor Heyerdahl. 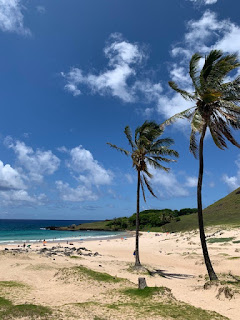 Anakena, the only beach on Easter Island 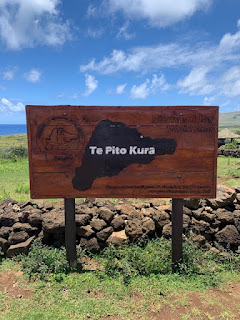 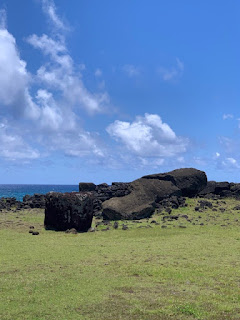 This was the largest Moai ever moved and erected. 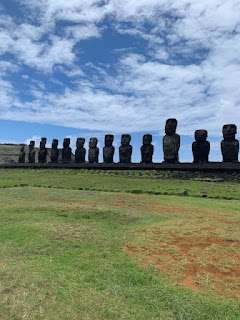 Exactly how the Moai were moved remains controversial. Two leading theories are that they were slid on logs, or 'walked' upright using ropes to wobble the statues forward. 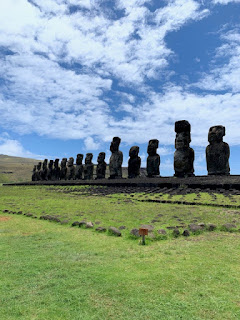 These Moai, at Ahu Tongariki, were restored in the 1990's with Japanese assistance. 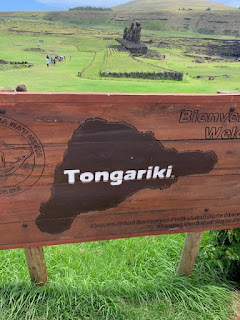 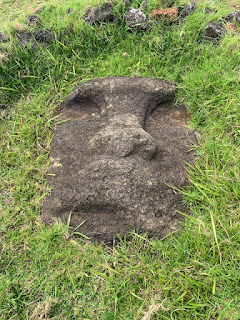 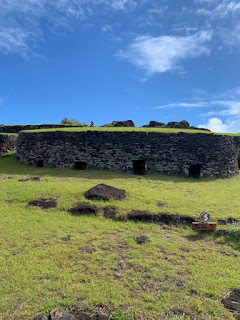 As civil wars dragged on interminably, the Bird Man Cult arose. Competing hereditary leaders agreed upon a competition whereby each would appoint a representative. The representatives would engage in a demanding race, which involved sprinting down a cliff to the sea, swimming to an island, retrieving the egg of a sooty tern, and returning with the unbroken egg to the pinnacle of the cliff. That 'Bird Man's' clan would rule unchallenged for one year, when there would be another contest. Although the bird man concept existed on other Polynesian islands, such as Hawaii, only Easter Island developed the grueling competition. 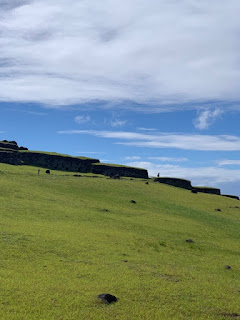 The ceremonial village of Orongo 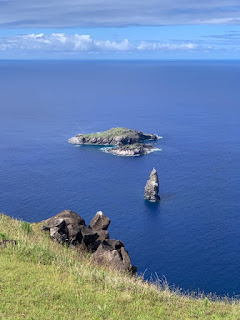 Bird Man competitors began by running down this cliff to the sea. 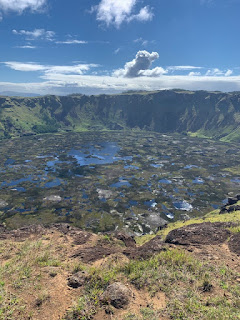 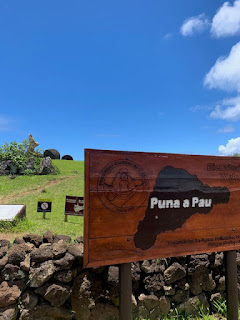 This is where the topknots for Moai were carved, from red scoria. 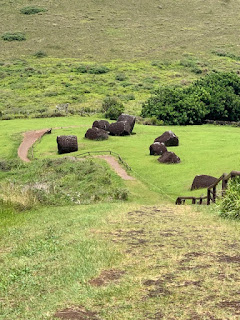 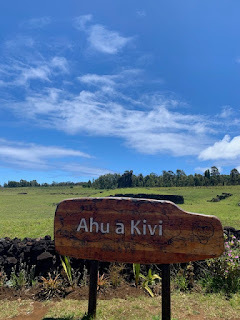 Site of the only Moai who overlook the sea, below 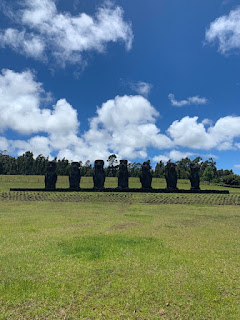 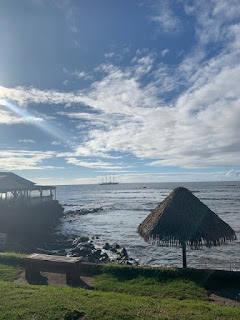 View from our restaurant 'downtown'. Tuna fish is plentiful in the surrounding waters and ubiquitous on island menus. Even fish and chips is prepared with fresh tuna. 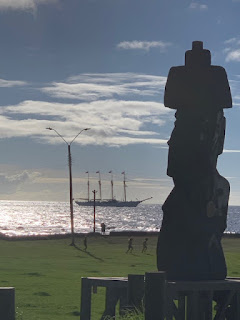 Easter Island is definitely off the beaten track, but to witness the haunting faces of the unique Moai makes any visit simply unforgettable.