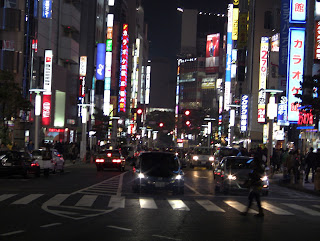 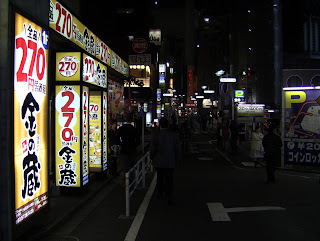 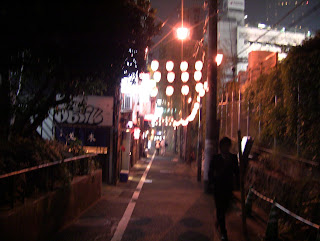 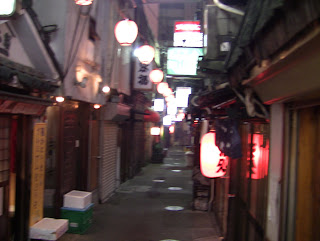 I had an experience along the way that warrants special comment--an invitation by one of our hosts in Japan to be his guest at a hostess club. It was an interesting evening and, I've been told, quite an honor to be invited. My host took me to what he described as the best club in the city and, when we entered, he was warmly greeted by a kimono-clad lady who obviously ran the place, and a young man in a tuxedo. Upon seeing me, however, their expressions changed. They informed my host that they were full for the evening, and he was not happy. It was obvious that they did not want a non-Japanese guest. A heated discussion ensued but, eventually, I followed my host out the door. He was on the phone immediately and led me through the streets, packed with cars and people and bright, garish lights everywhere.

The club he contacted had a man--again wearing a tux--greet us at the door. He led us down a winding staircase and into a room that looked like upscale clubs everywhere. Leather sofas, wooden tables, and thick carpeting. And pretty women. Lots of them, some wearing kimonos and others in contemporary dress. Four of them joined us immediately, including one who had lived for a while in Colorado and spoke excellent English. My host had clearly arranged for her to join us. We spent at least two hours engaged in pleasant conversation, with the former Colorado resident translating for everyone. The ladies poured all of our drinks, served snacks, and made it seem like everything we said was the epitome of wit. The 'mama-san' joined us, one of the ladies presented me with a fan as a gift, and we all bid each other good night. During the entire time we were in the club, there was not a hint of anything improper.

I have learned that such clubs are status symbols, in a way. My host probably spent two thousand dollars making sure that I was entertained, and it is a mark of prestige that he was able to do so. He observed that we have nothing similar to hostess clubs in the States and I could not disagree. All in all, it was a fascinating evening and a rare experience. As I walked back to the hotel, I thought of stopping for a nightcap. Through an open doorway, I spotted a bar and strolled in. Apparently, it was another hostess club because a young man in a tux quickly appeared and stepped in front of me. "So sorry," he said. "Japanese only.". Suddenly able to understand the effect of Jim Crow laws much better, I nodded and walked out.

I have learned that such discrimination is not uncommon in Japan. Some top-end restaurants and clubs are restricted to Japanese people. Although incredibly gracious hosts, there are certain aspects of Japanese life and culture that are reserved for the Japanese.

Next up: Hunter joins me in Tokyo and we have a couple of great days before meandering north to experience the wonders of Nikko.
Posted by Top Times Travel at 11:47 PM