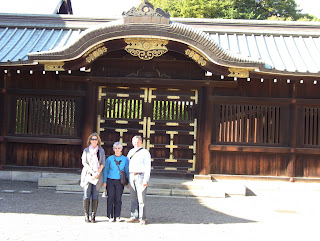 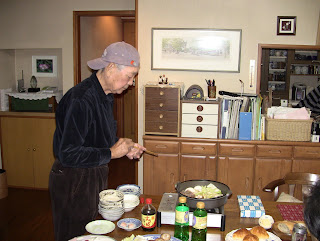 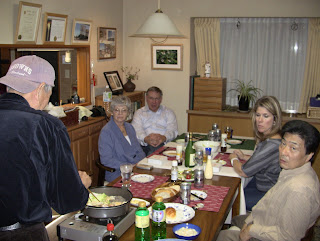 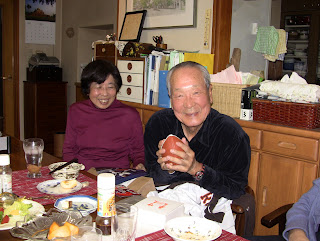 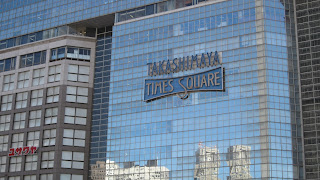 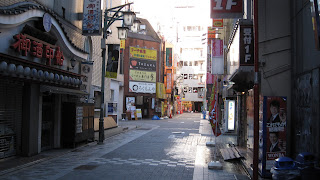 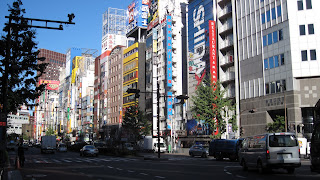 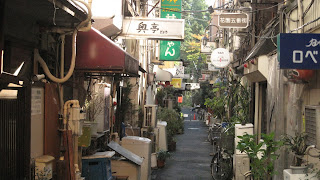 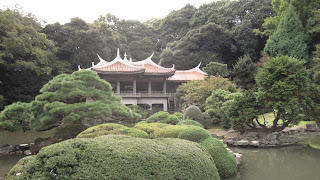 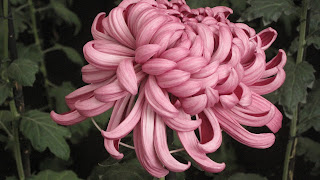 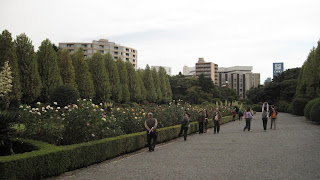 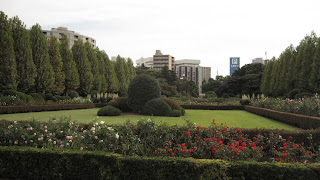 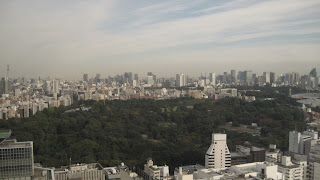 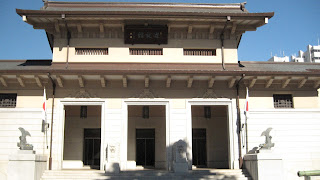 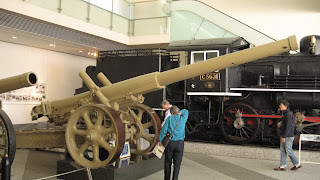 Following lunch at the mammoth Takashimaya shopping complex--labeled Times Square here--I returned to the hotel and waited for the other speakers to arrive.  They did--Lee, Carol, and Sue--along with our Japanese guide, Nitta-San.  We had a few beers after they settled in, at the Century Hotel sleek bar with its expansive view of the City, and strolled on a balmy night back to a great tempura restaurant in the Takashimaya. Dining with a Japanese host heightened the experience, as he ordered several courses which allowed us to sample a variety of tempura dishes, from assorted vegetables to an array of seafood.  The oysters were especially delectable and we all had a great time over white wine and generous portions of sake.

The morning came early and we were off to visit the Yasukuni Shrine, erected to honor the fallen soldiers in Japanese wars.  Traveling with Lee made everything simple as he once lived in Japan and speaks enough of the language to function well.  The temple is controversial in that other Asian nations believe it misrepresents the valor of the Japanese soldier while minimizing the atrocities committed by Japan against other nations.  I had mixed feelings about the visit, given how many relatives of mine were decorated soldiers during WWII, but the several and extensive displays were interesting if for no other reason than the opportunity to read the Japanese perspective on significant developments of WWII.  I certainly did not agree with everything I read, but the letters written by young soldiers to parents or significant others were poignant and highlighted the dedication of the young men to their country and their emperor.  No wonder they were so tenacious and defeating them took such incredible sacrifice and commitment by our country.

We then strolled through the upscale Ginza area, which reminded all of us of Fifth Avenue in NYC, given the near duplication of namebrand stores.  Following lunch, we headed back to the hotel to get ready for our dinner at the home of one of our Japanese hosts.  Dr. Okada heads the Institute that is sponsoring us and lives about an hour outside of the City.  We traveled via a combination of train and automobile and were warmly greeted by Dr. Okada, his wife, and secretary.  Dr. Okada served as chef that evening and prepared a tableside sukiyaki dinner for us.  Being in his home, having shed our shoes at the door and donning traditional slippers, was quite an experience.  As the meal wound down, it came up in conversation that Japanese people enjoying dipping their thinly fried meat or vegetables in a raw egg before consuming it.  Dr. Okada noted that Americans do not enjoy that, but I told him that I in fact did.  Of course, he quickly produced a raw egg and I just as quickly downed another course.  For one night, I think I was an honorary Japanese.

We exchanged gifts, a Japanese tradition on such an occasion, and Dr. Okada gave me a beautiful lacquered bamboo plate.  Having been told by Lee that Dr. Okada was a fan of the Cleveland Browns, I had arranged before the trip for former Brown Dick Ambrose to sign several items for Dr. Okada.  Dick graciously agreed to do so and Dr. Okada--at 77 years old--was clearly pleased with the gifts and I expect he is one of the oldest Browns fans in Japan.  Certainly the only one with a jersey signed by Dick Ambrose.

After a long cab ride back to the City, we stopped at Tokyo Tower, the orange-lit Japanese answer to the Eiffel Tower.  The structure, modeled after the Paris original, is draped in strands of orange lights and emits and oddly attractive pumpkin glow at night.  The views from above are terrific and the City gleams in its flashes of neon and bright white and red lights.  From high above, the bridges look like floating necklaces strung across the water.

We called it a night, returned to the hotel, and prepared to leave the next morning for the tourist town of Hakone.  While I am excited about the rest of the trip, the fact that I will be returning to Tokyo to spend some time with Hunter and further explore the City is a truly lucky opportunity.  Tokyo is, like a New York or London, a place where you could spend a lifetime and never know it entirely.  I will welcome even a few more days because the chance to scratch even the surface of this magical place is something not to be forgotten.
Posted by Top Times Travel at 5:44 AM