From Japan to Argentina and memories of dulce de leche 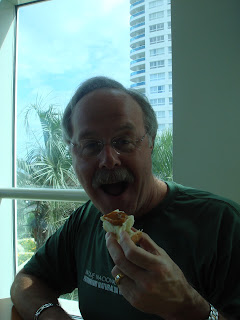 I am finally adjusting to the time change between Tokyo and Cleveland; a doctor friend of mine told me it takes one day for every hour that is different before you recover fully.  Tokyo was such a whirlwind of experiences that I've enjoyed reflecting on the memories of such  a unique country.  The incredible sense of order and politeness--one rarely hears a car horn, even in Tokyo--is juxtaposed against a blur of modern architecture and a kaleidoscope of glaring lights.  The absence of diversity in the people is striking to a Westerner accustomed to people of varying size and color.  To the Japanese, diversity seems to manifest itself more in the differences between people based upon station in life.  The language used to address another, the depth and duration of a bow, all signify that everyone is not the same.  These differences appear baffling to an outsider.  I spoke with an American who has lived in Japan for fifteen years and he still does not fully comprehend the bowing ritual.  Perhaps it is these mysteries of the Japanese which would lure me to visit the country again.  Not just the sake, not just the food, not just the incredible hospitality, but the sense that coming to understand Japan is like unpeeling layers, each time revealing and knowing a little bit more.

Our next entry will focus on our trip to Argentina, in part because I want to contrast our impressions of Victoria Falls with our thoughts of Iguazu Falls, on the Argentine/Brazilian border.  While Angel Falls in Venezuela is the tallest waterfall in the world, Victoria and Iguazu vie for most spectacular and, by volume, the largest.

As a lead-in to Argentina there is a terrific spread they make there called dulce de leche.  It is now available at some speciality food stores in the U.S. and, if you haven't tried it, I highly recommend that you pick some up.  Legend claims that it originated in 1829 when a general's servant accidentally left a mixture of sugar and milk on the stove.  A daring soldier tasted the dark brown paste that remained and a legend was born.  Today, dulce de leche is ubiquitous throughout Argentina and some estimate the average national consumption at five pounds annually.  To enjoy dulce de leche like an Argentine, sample it in the morning melted atop warm toast, or as an afternoon snack encased in milk chocolate.  Drizzle some over ice cream after dinner.  With none of the cloying stickiness of peanut butter, only the sweet caramel taste will linger, creamy and delicious, before melting away.  The memory of it won't so easily disappear.
Posted by Top Times Travel at 7:32 AM