For those unfamiliar with Lake Erie, it is one of five lakes (Huron, Erie, Michigan, Ontario, and Superior) comprising the Great Lakes system, the largest group of freshwater lakes in the world, accounting for 21 percent of the world's fresh water supply.  Only Lake Michigan lies entirely within the United States, with the others forming a serpentine boundary of water between the United States and Canada.

Our first port was Kelley's Island in Lake Erie, named for two brothers who once owned the entire island and christened it with their surname in 1840.  At four square miles, Kelley's is the largest American island in Lake Erie.  The Kelley brothers established businesses engaged in exporting limestone, fruit, and lumber.  Ironically, since they disapproved of alcohol and encouraged their employees to abstain, the island is now replete with a multitude of bars catering to boaters' medicinal needs.  In our case, particularly, vodka.

There are a few attractions on Kelley's which deserve special mention.  The Glacial Grooves are among the largest accessible grooves in the world, created by the ice sheet which covered a large swath of North America 18,000 years ago.  A trough that is 400 feet long, 35 feet wide, and 10 feet deep is etched into the terrain and is easily viewable by a network of trails and catwalks.  It is recommended, however, that you do not stroll near the trough after an afternoon of bar-hopping. 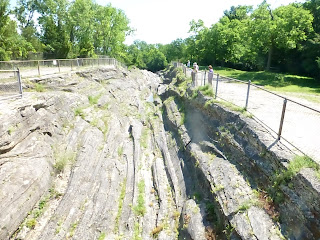 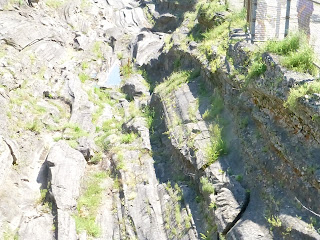 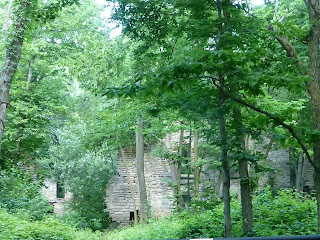 
Inscription Rock features pictographs carved into the limestone rock by Native Americans in the 1600's.   A pleasant natural feature on the island is the delightful sandy beach at the State Park near the Glacial Grooves.  We enjoyed the time spent on Kelley's with our fellow boaters, sharing a drink and dinner with friends old and new.  Then another drink.  Another.

My liver began to tingle and I knew that it was going to be a long week.
Posted by Top Times Travel at 11:22 AM