Kilkenny, Waterford, the Ring of Hook--and the Haunted Manor

More of the Castle

View from the Master Suite

Part of the gardens 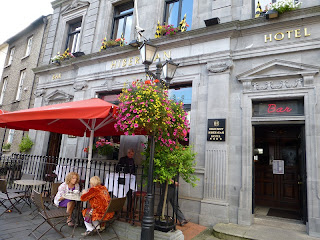 Lunch at the Bar at the Hibernian Hotel
--the manicured lawn and gardens are beautiful--we continued on to Waterford Castle.  A brief ferry ride deposited us on the shore of the island where the Castle is situated and the turreted structure slowly revealed itself through the trees as we drove along the winding road.  A stone fireplace at least six feet high contained a crackling fire that greeted us as we entered the Castle and took in walls adorned with intricate tapestries and paintings.  We enjoyed cocktails in the comfortable lounge before adjourning for dinner in the oak-panelled dining room with soft lighting provided by crystal chandeliers. 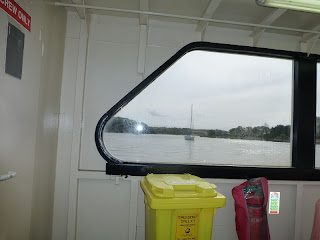 Ferry to the Castle

View from our room across the river

In the morning, we drove to Passage East and took the ferry across to the Hook Peninsula.  The road south, to the 13th century lighthouse at Hook Head, hugged the coast and we enjoyed the picturesque villages along the water.  Oncoming tour buses and lorries serve as a sort of "ready alert" system which ensures that drivers are in a constant state of awareness.  Or fear.  Local drivers, familiar with the roadways, also have a tendency to tailgate so the smartest course of action is to pull over from time to time and let vehicles pass while you enjoy the scenery.  When the little-traveled roads are clear, it's time to move on.


The road to the ferry over to Hook Peninsula


Little village on the other side


The Hook lighthouse, one of the oldest operational lighthouses in the world, affords spectacular views from the viewing platform several long steps up in the air.  The ascent is broken by visits to the chambers on each story that various lighthouse keepers lived in over the centuries.  So important to navigators was a light at the tip of this peninsula that monks are believed to have burnt oil, as a signal, as early as the 8th century.  The peninsula is immortalized in the phrase "By Hook or by Crooke", uttered by Cromwell when he observed that there were two locations by which he could take the area:  the Hook Peninsula or Crooke, in neighboring Waterford County. 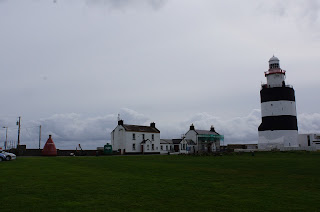 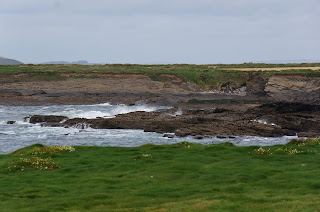 View from the ground (Linda's view)

View from the top (Michael's view) 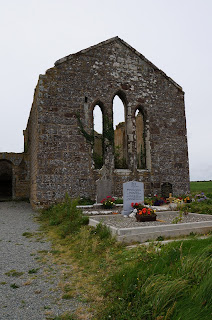 A large and apparently abandoned manor home caught our eye along the drive.  We learned it is called Loftus Hall, after the family that once owned it, and is one of the most haunted locations in Ireland.  According to legend, an imposing figure asked for shelter one evening during a raging downpour.  The family granted the man's request and invited him to join them for dinner.  While playing cards afterwards, Anne Loftus dropped one and, when she stooped to pick it up, noted that the visitor wore not boots, but had cloven feet.  When she screamed, the mysterious stranger shot straight up through the ceiling and roof and was never seen again.  Anne Loftus spent her remaining days in her room, refusing food or drink, and became raving mad before she died. 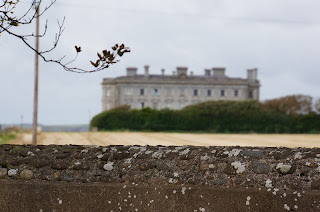 Deserted village close by, notice the rosary draped on the cross

Fields with Loftus Hall in the distance
﻿

I don't know about the legend, but I do know that the empty manor home conveys a sense of despair and decay.  Locals informed us that the manor has supposedly been bought and will soon be repaired and available for public functions.  The new owner's identity has not been revealed--he is allegedly a famous Irish rock star well known for charity work in Africa.  Can't imagine who that might be.

We enjoyed a meal within the confines of Waterford that evening, sipping Irish whiskey and musing about the lives of long-ago monks who tended flames on a windswept peninsula.  We wondered about the battles raged and lives lost, and speculated about the improbable story of a man with cloven feet and a young lass driven mad. 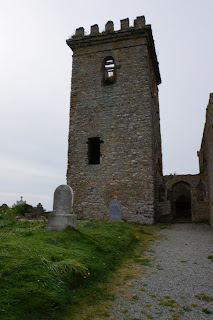 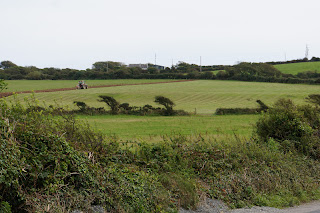 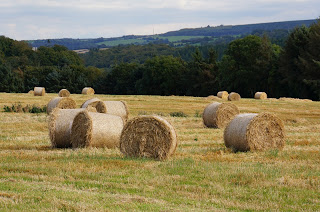 Posted by Top Times Travel at 8:23 AM