Prague: A Step Back in Time

We selected Prague more as a convenient stopover on a trip between Paris and Vienna than for any other reason, and were both surprised and elated at what we found.  Spared from the devastation that ripped through many other European cities during WWII, Prague is a charming gem of a place, an exciting and incongruous blend of the medieval and the modern.  A city of 1.3 million inhabitants, it is bursting with ideas and hope after too many decades stunted by the pallor of communist rule.  As our lovely guide, Martina, explained; "My father had to reason to try anything.  He was given a job, and the man in the booth next to his made exactly the same whether he worked or not.  Now, everyone wants to do something different and be their own person."

While there are certainly some ugly architectural relics from the communist era, there are many more churches, castles, squares, and even houses that have been preserved from medieval times.  A good place to begin is a walk along cobblestone streets, lined with shops and full of tourists, to the storied Old Town Square.  Amble around and take in colorful buildings of every shape and size that seem like something Disney might try to design.  Don't miss the Astronomical Clock, constructed in the fifteenth century, that features twelve sculpted apostles appearing on an elevated platform every hour. 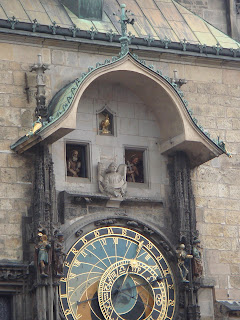 A great place to soak in the ambiance of the Square is at the Hotel U Prince Bar.  Linda and I were given an outdoor table and sat for some time just enjoying the parade of people strolling about.  A helpful tourist tip: Czech law forbids street vendors from talking to or otherwise harassing anyone.  They can stand and point at whatever they're hawking, but that's it. 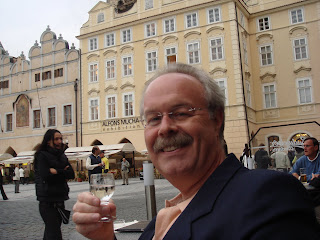 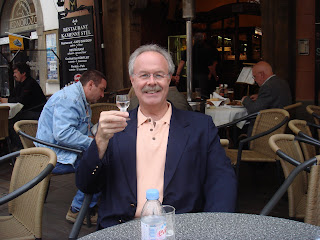 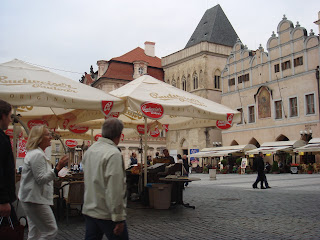 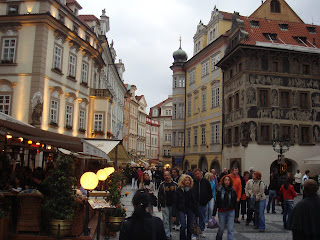 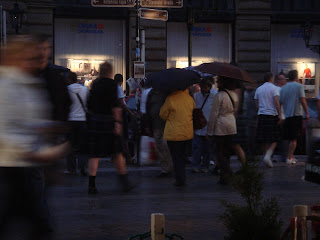 The "lads" were dressed for the world rugby cup.
We stayed at the Four Seasons Prague and were very pleased with the choice.  It is not far from the Old Town Square, right on the bank of the Vltava River that separates Old and New Towns, and only a block walk from the famed Charles Bridge.  The Bridge, erected centuries ago, is dominated at both ends by huge and ornate towers.  Along the Bridge, on both sides, are more than thirty sculptures of saints.  A stroll over the Bridge, particularly in the evening glow of the City's lights, is a delightful experience.  The night skyline is dominated by the mammoth Prague Castle, said to be the world's largest, which is perched atop the highest point in the City and glows beautifully in the evening under soft golden lights. 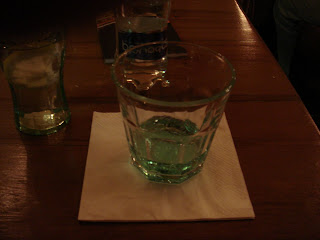 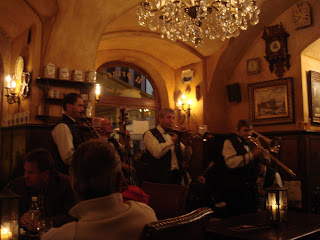 Hotel U Prince Bar at night with entertainment. 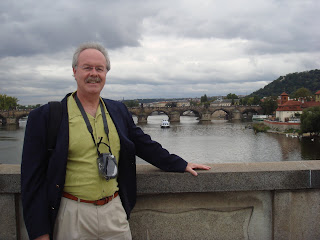 Looking back on the Charles Bridge. 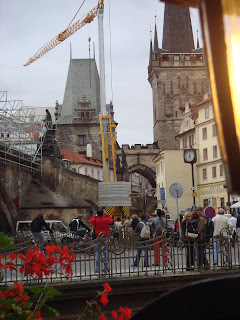 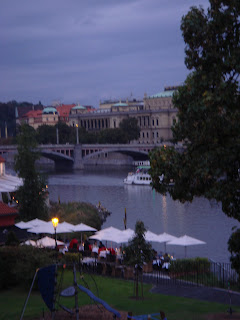 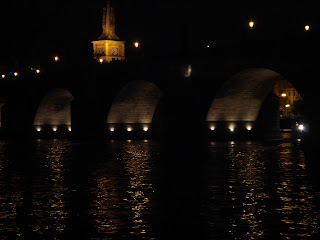 We visited the Castle on our first day and were overwhelmed by its sheer size and complexity.  A warren of twisting alleys, more buildings than we could count, and all connected by three huge courtyards sprawling over 112 acres.  The highlight was St. Vitus Cathedral, with so much intricate detail on the interior that it was difficult to comprehend all of it.  The stained glass windows were among, if not the most, beautiful we had ever seen.

We dined at the Blue Rose restaurant and thoroughly enjoyed both the cuisine and the decor.  The restaurant is essentially a below-ground brick cellar with a vaulted ceiling.  We learned that there are many such structures in Prague, as the city--over centuries--has built atop older buildings to avoid river flooding.  These cellars--now restaurants, clubs, or storage facilities--sometimes descend for three stories.  The most bland of surface establishments may sit atop a fascinating hive of underground surprises.  For dinner, we enjoyed a Trivento, '05 Reserve Malbec, with a fine meal.  We had cream of asparagus soup with shrimp and escargot.  Linda's main dish was pork tenderloin wrapped in bacon and stuffed with pears and apricots.  After dinner, we adjourned to the hotel bar where I imbibed one too many glasses of absinthe and dreamed of what we might see on the 'morrow. 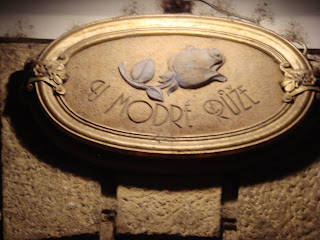 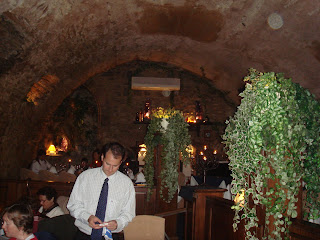 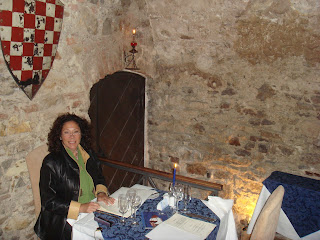