Traveling north from Buenos Aires by plane, we visited the incredible Iguazu Falls.  You've likely seen these Falls in films including, for example, The Mission or Indian Jones and the Crystal Skull.  When Eleanor Roosevelt saw the Falls, she is said to have observed, "Poor Niagara!".  To put these Falls in perspective, here are some statistics culled from Wikpedia: 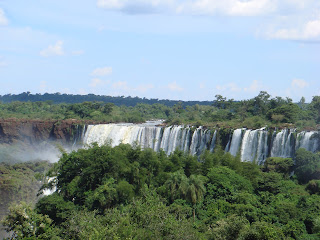 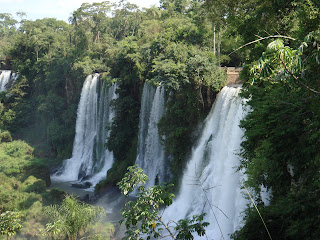 Having been blessed to see all three waterfalls, the question is which is the most impressive?  Although I have a soft spot in my heart for Niagara--my parents honeymooned there--it ranks third of the three.  As to Iguazu and Victoria, that is a tough call.  They are very different waterfalls.  Victoria is the largest curtain of water in the world whereas Iguazu is a series of 275 waterfalls punctuated by verdant islands.  Linda and I agree on the winner: Iguazu.  As astonishing as the Victoria Falls are, the sheer number of waterfalls at Iguazu, ranging from mammoth torrents of water to delicate streams gently flowing over walls of green, challenge the senses.  We felt as though are necks were on pivots as we struggled to take everything in. 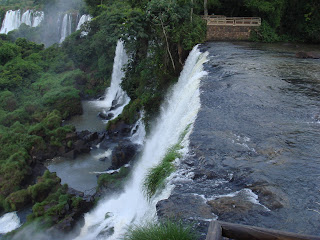 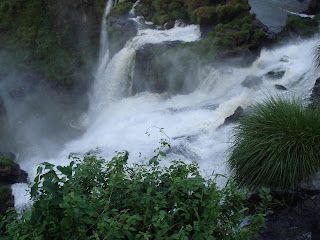 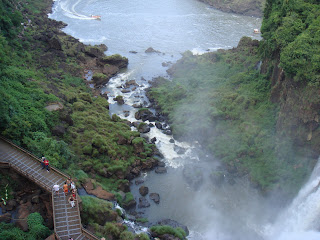 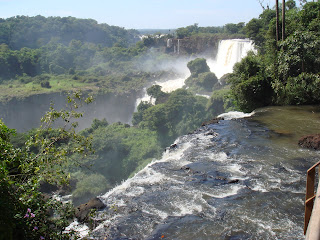 We stayed at the Sheraton Iguazu, the only hotel in the park itself, and had a view of the Falls from our balcony.  We enjoyed a martini before dinner and it was the best we had in Argentina.  Like their European counterparts, Argentine bartenders tend to use too much vermouth.  I complimented the Sheraton bartender and asked him where he had learned to make such an excellent martini.  His answer:  "Robert DeNiro showed me."  He explained that when DeNiro was filming The Mission, he stayed at the Sheraton and taught the bartender to make a martini exactly the way he liked it.  I've always enjoyed DeNiro's acting, and now thank him for making our stay at Iguazu even more enjoyable. 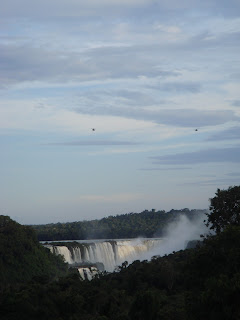 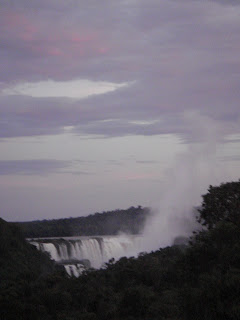 The largest cataract is called the Devil's Throat--note the similarity of the name to the Devil's Pool at Victoria.  Note to traveler: if an attraction has the word 'Devil' in it, ask a lot of questions about exactly what you are getting into.  To reach the Devil's Throat, you walk along a steel catwalk all the way across the river until you are on a platform perched above the water just before in plummets over the precipice.  The view, above the roar of the rushing water and the cold spray that licks at you, is frightening as you try and comprehend the power generated by the raging torrent.  Your imagination is helped by the remnants of a prior catwalk that was destroyed when the river flooded. 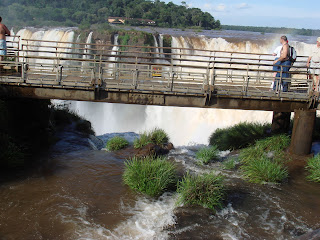 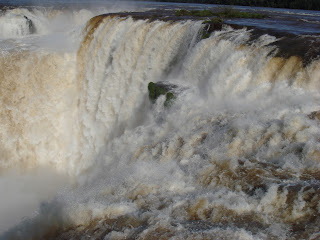 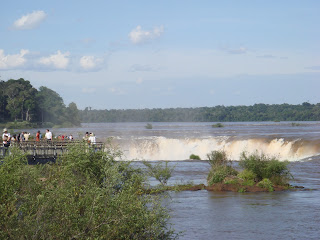 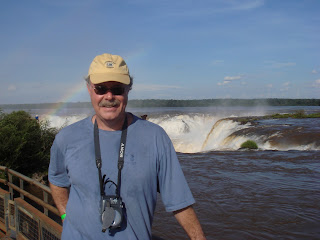 We left the cataract and took a truck along a bumpy road through the forest to the bank of the river.  There, we boarded a boat and went for an exhilarating ride to view the Falls, including up-close adventures when we curled against some of the massive walls of water as they tore into the river and everyone aboard became absolutely soaked.  All of it was great fun until the boat dropped us off and we were faced with a climb of several hundred feet.  Despite the beautiful scenery, hiking uphill in the heat and humidity was not fun.  Linda shot me several looks, along with comments I won't repeat here, and I knew that a trip to a jewelry store was in my immediate future. 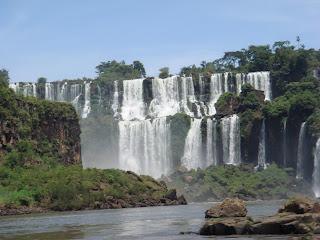 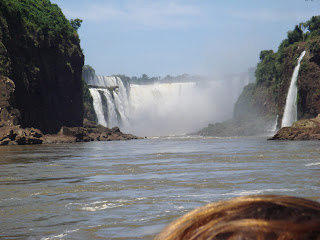 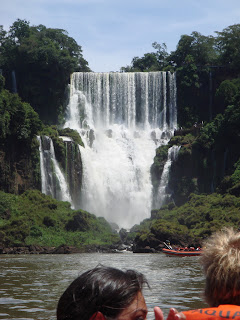 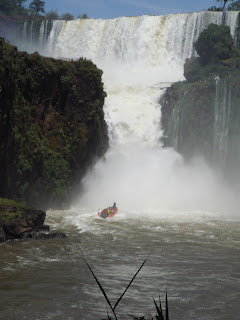 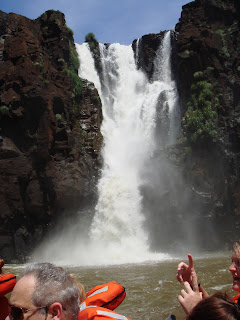 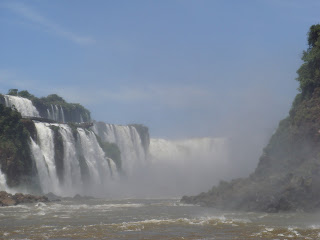 On our final day at Iguazu, I took a cab across the river to view the Falls from Brazil.  Linda opted to stay at the pool and relax, although she needed to be cautious because of an outbreak of Dengue fever--spread by mosquitoes--in nearby Paraguay.  I was not disappointed that I'd taken the trip, because the Brazilian view is very different from, but equally astonishing, as the panorama from the Argentine side.  Particularly noteworthy was a walkway to the base of the Devil's Throat.  As you stand and gaze up at the sheer immensity of the wall of water crashing down so nearby it literally takes your breath away.  An experience well worth the spray of water that soaks you; a sheen of mist that you stand and tolerate because you don't want to leave. 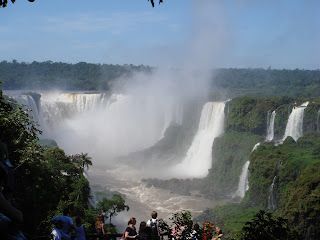 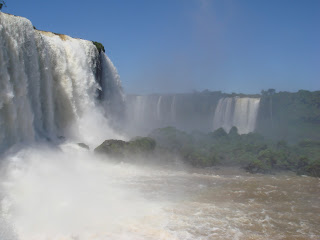 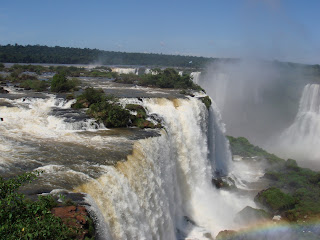 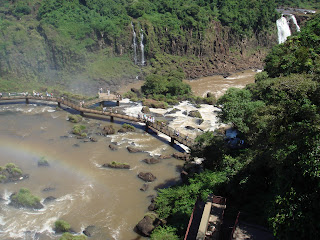 The taxi driver offered to take me on a side trip to Paraguay on the way back, but I declined.  Not only did I want to get back to Linda, but I did not have a visa to visit Paraguay.  When I explained to the driver about my lack of a visa, he laughed and said that Paraguay is too poor a country to patrol its borders.  He assured my that no papers would be needed but I nevertheless declined.  With my luck, I worried that I'd be intercepted and spend some time in a Paraguayan jail cell--not my idea of a good time.  I subsequently learned that the triangle where Brazil, Argentina, and Paraguay converge is, indeed, a haven for smugglers, criminals, and even Middle Eastern terrorist groups.  The jungle makes it difficult to patrol and the borders are consequently porous.

On our final night, Linda and I had dinner at a lively restaurant in town, complete with dancing and music.  The steak was outstanding and grilled tableside.  Back at the hotel, we gazed through a clear sky to see the Southern Cross constellation and capped the evening with a nightcap in the bar.  We toasted Mr. DeNiro and looked forward to our departure in the morning and our journey onward to Uruguay. 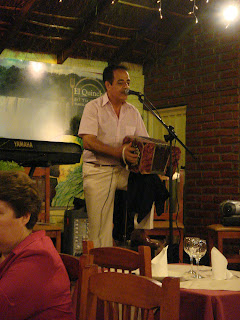 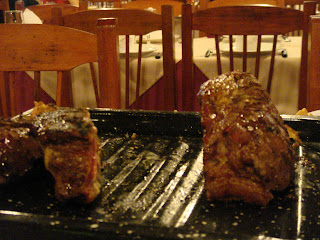 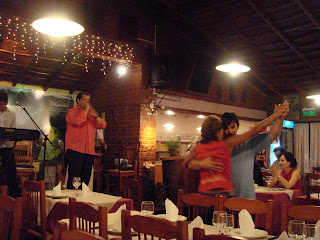 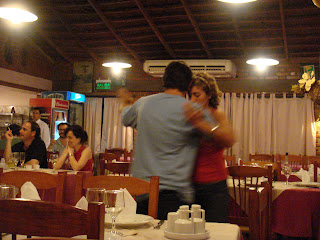