We spent three days in this lovely city while awaiting the departure of a Silverseas cruise through the Mediterranean.  Barcelona, the second largest city in Spain, sprawls from the sea into the Iberian peninsula.  The extended and popular beach, voted the best urban beach in the world, seems to stretch forever and lends big city Barcelona a resort-like flair.  We stayed at the Hotel Arts, perched right above the beach, and enjoyed stunning views of both the city and the sea from our room.  The Hotel is strikingly modern, with abundant sculptures both indoor and out, and the dark bar, its walls lined with mirrors, faces a tiered stone fountain decorated with dwarf palms.

Having practiced my Spanish for weeks before the trip, I couldn't wait to order our first drinks.  Of course, I had rehearsed exactly how to order our vodka martinis--up, very dry, with a lemon twist--and was flabbergasted when the waitress didn't understand a word.  Fortunately, I learned that it was only her second day on the job, she was from Italy, and spoke not a word of Spanish.  We enjoyed cocktails as well as tapas, including our first taste of Jamon de Bellota.  Made from pigs that are raised on a diet of acorns, the ham is so delicate it melts at room temperature. The flavor is incredible.  It is said that when the Japanese first experienced the ham, they created a word for it because it tasted like nothing else.  Linda and I made it a point to have a taste every day.  Typically, it is served with a bread rubbed with salt, olive oil, and tomato that is said to be unique to the region.  We were told it was created as a way to make stale bread taste good.  Worked for me.

Linda and I strolled the first day, deciding--at my recommendation--that we walk to the storied La Rambla street and see the sights.  Of course, I misread the map and led us into the worst area in Barcelona.  The streets were dirty, small and dark bars were well occupied at 11:00 a.m., and we were the only tourists in sight.  I kept remarking how wonderful the 'local color' was but Linda wasn't buying it.  People I stopped for directions seemed less than helpful. 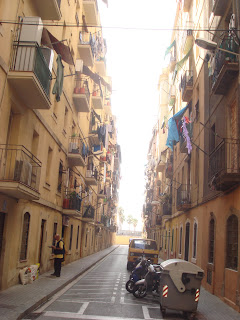 Eventually, however, we emerged from the twisting streets, made our way to wide Colon Avenue, and found La Rambla.  The pedestrian-only street is a kaleidoscope of people, sidewalk cafes, vendors and street performers. In older times, sections of the street were reserved for certain types of products.  For example, there might be an area where all the purveyors of candy would converge.  Only vestiges of that remain now, such as an area where the sellers of birds congregate--the cages, stacked atop one another on the road, are full of colorful plumes and raucous cries.  We stopped for a drink and watched the street performers, then continued on and visited the sprawling Central Market which abuts La Rambla.  Food stands of every type abound, along with restaurants and bars interspersed between the stalls.  Following lunch, we visited some of the shops and continued our stroll along La Rambla.  The street ends at a large traffic circle and we enjoyed a cocktail, accompanied by succulent anchovy-stuffed olives, and watched the world go by. 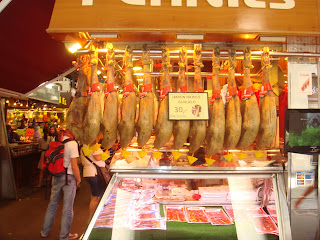 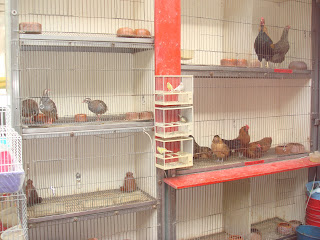 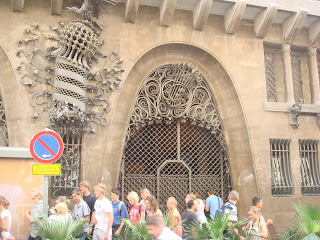 We had no dinner reservations for the evening, so I asked an employee at the hotel where he would take his family for tapas.  He directed us to the Ciudad Condal, which is the old name for the city itself, and steered us right.  The establishment itself is striking, with cherry-panelled walls and recessed lights.  A huge bar and counter stretch the length of the first floor, and all manner of tapas are arranged behind glass that rims the counter top.  While the restaurant is certainly not tourist-free, and an English menu is available, I would guess that locals outnumbered tourists 9-1.  Even on a Monday night, there was a half-hour wait for a table, but it was well worth it.  We had an assortment of olives, ham, shrimp, clams, squid, salmon, and perhaps the best calamari we've ever tasted.

We closed the day with a nightcap at the Hotel and looked forward to the next.  We'd arranged for a guided tour of the City but I'll save that for the next post.  Suffice to say, we not only saw Barcelona, but learned something very important:  we were in Catalonia, not Spain. 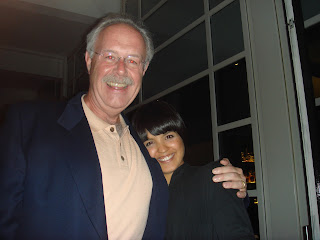